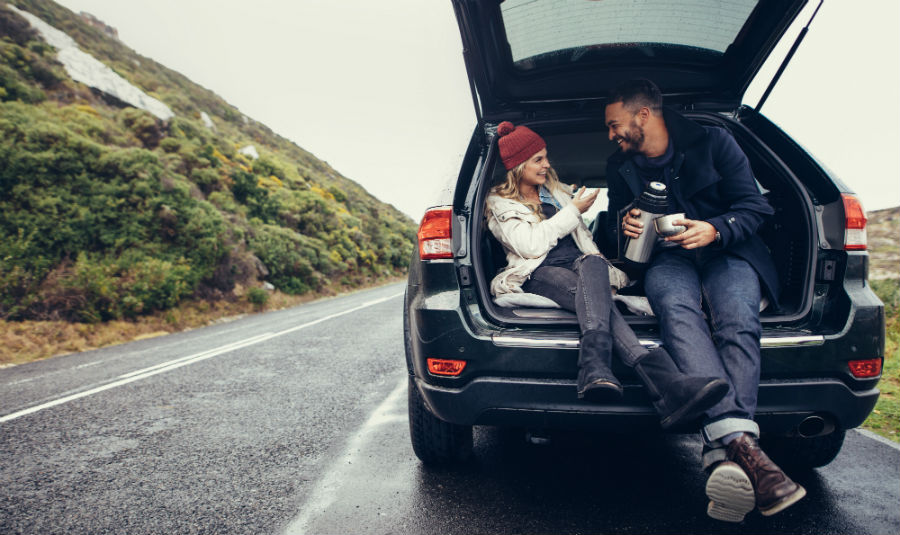 Thinking about buying an SUV? The top ten SUVs in Canada are a great starting point, but car buying is much more than a simple list.

Questions about budget and style are sure to arise as well. Our goal at Ratehub.ca is to be the champions of choice, so I put together a buying guide showing you the top ten SUVs in Canada in 2021 (so far).  Then I take the best sellers and break it down by cost category including the cheapest SUVs, most fuel-efficient SUVs, cheapest SUVs to insure, and finally the safest SUVs.

From there, we use a point system to grade each SUV by its appropriate category to finally determine what is the best SUV to buy in Canada.

A quick note: As you can see, there are small, midsize, and large SUVs so we do get some differences in their cost breakdowns. The Subaru Crosstrek and Hyundai Kona are subcompact SUVs, sometimes called Crossovers. While SUVs and Crossovers are different, there is a lot of grey area. The purest explanation is a crossover is built on a car chassis and not necessarily designed to go off-roading, whereas an SUV is built on a truck chassis and designed to go off-road. Formerly, the term SUV made people think of a bulky vehicle with poor fuel efficiency. For that reason, many automakers began using “Crossover” to market a more compact, gas-friendly version of the SUV. For that reason, our list is made up of both SUVs and crossovers since shoppers are often looking at both.

Best Selling SUVs in Canada for 2021

*according to goodcarbadcar.net (2021 SUV sales as of June  7th)

That list is for the best-selling SUVs in Canada, but we’re going to dig into this a little further.

Let’s start by rearranging this best sellers list on price. To keep our comparison fair, we’re going to look at base model costs because, as you may know already, the Hyundai Kona is the smaller sibling of the Hyundai Tucson. However, because this is an SUV buying guide, we still need to look at the base model cost of each SUV since the cost is a significant factor in deciding the best SUV to buy in Canada.

When we last did this list in 2019, a number of vehicles have fallen off including Ford Escape, Nissan Rogue, Volkswagen Tiguan, Jeep Wrangler, and Jeep Grand Cherokee.

The Toyota RAV4 continues to be the top-selling SUV in Canada. Honda CR-V is still a dominant player. Sales of the Hyundai Kona are up 103% from last year. Mazda CX-5 is up 90%, and Tuscon is up 61%. Of the top ten with the biggest gains – the Kia Seltos is up 271% and the Subaru Crosstrek is up 115%.

As suspected, the Hyundai crossover (the smallest) comes in at the cheapest price but it’s interesting to see where the Tucson sits among the competition for cheapest SUVs in Canada. Kia is certainly making inroads in its attempt to own the market. They weren’t on the 2019 list at all.

Now, don’t forget, these are the base prices. So, each vehicle does not include optional add-ons like all-wheel drive (AWD) or all-leather interiors, so it’s not digging deep into a side-by-side model comparison. We’re comparing SUVs through the lens of money. Arguably, a valuable starting point, especially if budget is a concern. If you want an SUV but your rough budget is $30,000 taxes in, well, you may be looking at a used car.

Moving right along, which one of the best-selling SUVs in Canada is friendliest at the pump? Of course, the Hyundai Kona has an all-electric version available which would obviously crush the competition in this category. Kia Seltos has one planned for a global release, maybe in 2022.  Subaru Crosstrek, Hyundai Sante Fe, Toyota RAV4 and Highlander offer hybrid versions.

However, to keep comparisons fair, we’re looking at base models. So we ask the question, which SUV is the best on gas in Canada? Let’s look at the results.

The most fuel-efficient SUV in Canada (of the best-sellers)

While gas prices are again on the rise, companies are adapting and becoming more fuel-efficient. I don’t know about you, but the biggest monthly expenditure on my vehicle isn’t gas anymore –  it’s the cost of insurance.

Of course, bigger SUVs take more gas than Crossovers, but ultimately, it’s why shopping for car insurance quotes should be a bigger priority over hunting for fuel efficiency. Now, if your number one priority is fuel efficiency, there are better options, but they didn’t make the best sellers list. The most fuel-efficient SUVs are the Nissan Kicks, followed by the Lexus UX200, and then the Kia Soul. Honda’s HRV is next on the list of most fuel-efficient cars, but its big brother, The Honda CRV, ranks 4th for the most fuel-efficient SUV in Canada and it’s also in our best seller category, so it wins in this regard.

Insurance varies by location (postal codes can make a difference), demographics like age and gender, and of course the vehicle itself. Since we’re only looking at the vehicles, we’ll eliminate the noise, create a control, and figure out which SUV is the cheapest to insure.

Our control in this example, is a 30-year-old female, with a clean driving record, looking for car insurance in Kitchener. We’re going to pick a comprehensive auto insurance quote that includes comprehensive, collision, and $1 million in third-party liability. She has been insured for over 10 years (even if it was under her parent’s policy).

Cheapest SUV in Canada to insure (of the best-sellers)

The winner in the insurance category of Ontario car insurance quotes goes to the Subaru Crosstrek Convenience. 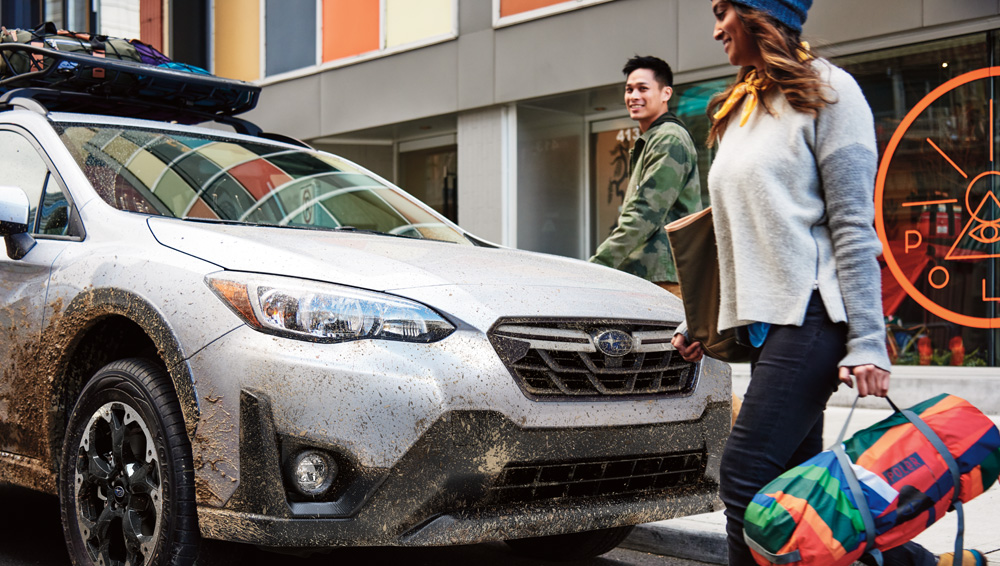 The make and model of the SUV you select carries different insurance risks, and therefore costs. The more the car is stolen, the higher the insurance price because there is more associated risk. The more claims against the car, the more your insurance will cost. It sounds odd, but think of it this way – a minivan costs less to insure than a 4 door sedan, why? The drivers of a minivan are often safer, more defensive drivers since they’re typically carrying family members.

If you’re wondering which cars have a high number of claims against them, you can look it up with the Insurance Bureau of Canada’s “CLEAR” table for collision, comprehensive, and direct compensation property damage (DCPD) to see which cars may have cheaper insurance.

The car you choose carries with it some insurance factors. The more the vehicle is stolen, the higher the insurance price because there is a greater associated risk. The more claims against the car, the more your insurance will cost. It sounds odd, but think of it this way – a minivan costs less to insure than a 4 door sedan, why? The drivers of a minivan are often safer, more defensive drivers because they’re typically carrying family members.

If you’re wondering which cars have a high number of claims against them, you can look it up with the Insurance Bureau of Canada’s “CLEAR” table for collision, comprehensive, and direct compensation property damage (DCPD) to see which cars may have cheaper insurance.

On the topic of claims, another factor you might consider in your purchase is the safety of the car. A safer car, one with more sensors, more cameras and other safety technology should reduce your chances of getting into an accident which may force you to make a claim. That said, let’s look at SUVs with the highest safety ratings.

The Insurance Institute for Highway Safety (IIHS) uses two factors when it comes to safety.

Let’s look at how the top ten SUVs in Canada did with their IIHS safety ratings. With this list, it’s black or white. Even if they are a safe car, if they didn’t get a top safety pick, they’re not on the list.

The safest SUVs in Canada 2021 (of the top sellers)

All the best-selling SUVs in Canada are top safety picks according to IIHS, but two cars made the “Top Safety Pick +” and the only differentiator I see to make the list is that “Acceptable or good headlights come standard.” So, take that for whatever it’s worth for you. Here are the top Safety Picks +.

Hopefully, this list helps you choose better when shopping for an SUV in Canada.

For those skimming, I thought I’d do one more to help narrow your decision.

Let’s look at all these lists – the cheapest to buy, the most fuel-efficient, the cheapest insurance, and one of the highest safety picks and decide which of the top ten SUVs in Canada is the best to buy. We’ve removed the idea of buying a “lemon.” No matter what SUV you buy, of any mentioned in the list, you’re making a smart choice, but in the end, which is the best SUV to buy in Canada?

Best SUV to buy in Canada

Winer for the best SUV in Canada in 2021 is the Subaru Crosstrek. In 2019, The Kona essential won and I admit, these are both more crossovers than SUVs. Kia did not make the list at all in 2019, so you can see their steady improvements.

With all the information presented, the idea is you can choose better for yourself. If you really want the style factor of the new Ford Bronco or the power of a Volkswagen or BMW, that didn’t make the list, so be it. Hopefully, you can use the point system as a guide and put your own values on it. Finally, it’s worth remembering, our original list is still the top ten SUVs in Canada. It’d be hard to call any of them a bad choice.

The cheapest SUVs in Canada for 2019

The most fuel-efficient SUV in Canada 2019

Cheapest SUV in Canada to insure 2019