Weeping tile: How they protect your home

Weeping tile: the name makes it sound like a super emo building material. But it’s really a drainage system that plays a crucial role in keeping water out of a home’s basement. A weeping tile is a porous drainage pipe surrounding the exterior of a home’s foundation. It’s buried in a trench filled with gravel and soil. The trench is dug on a slope. That way when the pipe collects groundwater, it’s redirected away from the house into the yard, storm sewer or underground sump pit. Weeping tiles can also be used for basement window well drainage or buried underneath a yard to prevent pooling.

What is a weeping tile?

The name is a callback to when terracotta tiles and pipes were used for drainage. Still, the modern weeping tile consists of a plastic or PVC pipe with tiny holes poked throughout one side.

A weeping tile is also called a perimeter drain (because it’s located around the home’s perimeter) or a French drain. The french drain derives its name from the American lawyer and agriculturalist Henry Flagg French, who developed and popularized its usage in the 1800s. These names are used interchangeably, but they’re all referring to the same type of drainage system. The only real difference between them is whether the weeping tile drains to an interior or exterior location (more on that below). 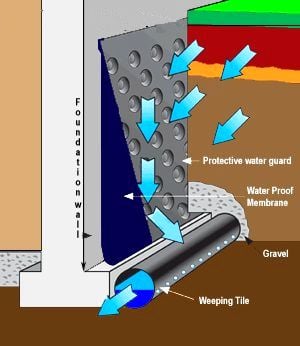 How does a weeping tile work?

The pipe is placed in a dug-out trench or channel around the home’s foundation with the holes facing downward. When rainfall or snowmelt flows through the ground, the perimeter drain collects it and carries it further out into the yard. It can go to a french pit (a 5 ft hole filled with rocks) or the central sewer system if it’s an exterior drain. An interior drain will go into a sump pit.

A vital aspect of an effective weeping tile is a proper slope in the surrounding earth. Exact measurements will vary depending on the size of the property (a professional can map it out accurately). Still, in general, it’s recommended that the earth slopes away from the house at a grade of 1 inch per foot for every 6 to 10 feet of yard. A typical drain system in Canada is sloped 1/4 inch per foot.

All that water has to go somewhere. When water flows into a weeping tile, the water can drain to a few places. 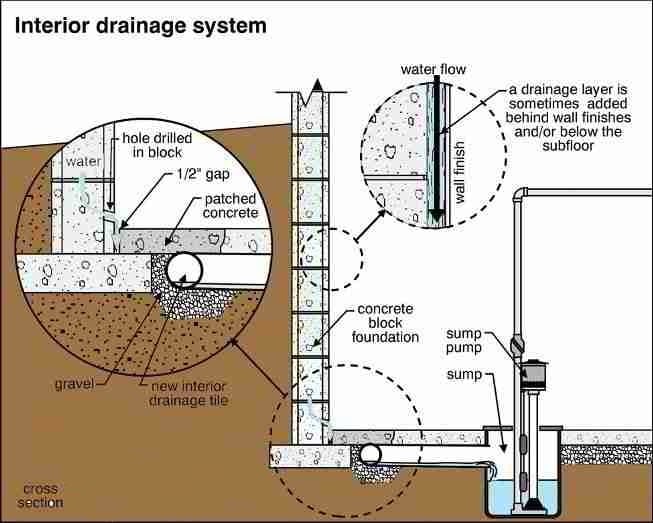 How to install a weeping tile

Most modern homes are built with weeping tiles. During construction, a trench is excavated around the home’s foundation. The surrounding earth will be professionally graded to ensure proper sloping. The pipe may be wrapped in a cloth or mesh material to prevent soil from entering the holes and clogging it. The area surrounding the pipe is filled in with coarse gravel to encourage drainage, then backfilled with dirt, then maybe concrete on top.

Homebuilders are responsible for proper sloping when constructing a home, but homeowners are responsible for maintaining it. When installed and maintained correctly, a weeping tile can last a few decades. It’s a critical piece of equipment because home insurance companies will want to know if you’ve ever had water damage when they’re quoting you a rate. This can make a difference if you already live in an area with higher than average home insurance rates—for example, B.C. home insurance tends to be more expensive than Ontario home insurance because of the higher risks from earthquakes. Many BC homeowners will opt in to earthquake insurance or have it forced upon them if they live in a high risk zone.

In less than 5 minutes, you can compare multiple home insurance quotes from Canada's top providers for free.

How to fix a weeping tile

With water damage being the leading culprit behind home and tenant insurance claims, it pays off, in the long run, to keep your perimeter drain maintained. The most common problems include the weeping tile pipe becoming clogged and damaged or eroding from time.

It’s pretty difficult to check up on a pipe that’s buried underground beneath layers of soil and gravel. Still, there are a few telltale outward signs: water stains or cracks in your basement wall, mould, mildew or musty smells in your basement, and pooling water around basement windows and the exterior of the home.

If you see the signs of a busted pipe, you’ll need to have professionals take a look to see if your weeping tile needs to be cleaned out or totally replaced. A professional plumber will often check the weeping tile using a camera, so make sure there is an access point.

How much does it cost to install weeping tile?

This would usually be factored into a home’s construction. If you live in an older home you may not have any weeping tile. Regardless, a lot will depend on the size of your home. The larger the area, the more digging and the more pipe need to be used and so it costs more.

The accessibility of the weeping tile area is one factor. For instance, if it requires breaking up concrete vs. only digging up soil, or if they can use a machine vs. manual digging. Concrete and manual digging and your costs will go up. While exposed, if it’s not done already, consider any other waterproofing work, either replacing or installing anew. The cost could start in the hundreds for a relatively simple replacement, or run into the thousands once you get into significant waterproofing renovations.

According to RCC waterproofing, “The cost of basement waterproofing can typically range between $1000-$25,000 but could go as high as above $50,000 depending on the size of the building.” But for weeping tile only, you can expect about $30 per foot.

Can you connect downspouts to a weeping tile?

You can, but it’s generally not recommended unless you have a more extensive and sophisticated network of perimeter drains.

A downspout (also called a downpipe, waterspout or drain spout) is a vertical pipe that carries excess rainwater from the roof’s rain gutter to the ground. The bottom of the spout is usually bent at an angle. It may be fitted with a downspout extension to carry water even further away from the house.

When a downspout is connected to a weeping tile, substantial rainfall funnelled into one underground location can overwhelm the drainage system and result in backups, basement flooding and foundation damage. In some towns and cities, the downspout cannot be connected to the municipal sewer system by law.

For downspouts and weeping tiles to do their jobs effectively, the soil must be correctly graded so water slopes away from the home’s foundation. The same goes for a weeping tile trench: the pipe can collect water, but it’s the power of gravity via a proper downhill incline that will carry it away from the house.

Whether a basement can ever be 100% waterproof might be a philosophical query for the ages. Still, there’s no question weeping tiles (or perimeter drains, or French drains) are an effective system to collect and redirect rainfall and melting snow. When it comes to protecting your home from the forces of Mother Nature, compare home insurance quotes to make sure you have a “water” tight policy. That policy may include coverage for water damage or flooding with endorsements such as overland water or a sewer backup.