Money Hungry: A Q&A with Author Chelsea Fagan on The Financial Diet Book 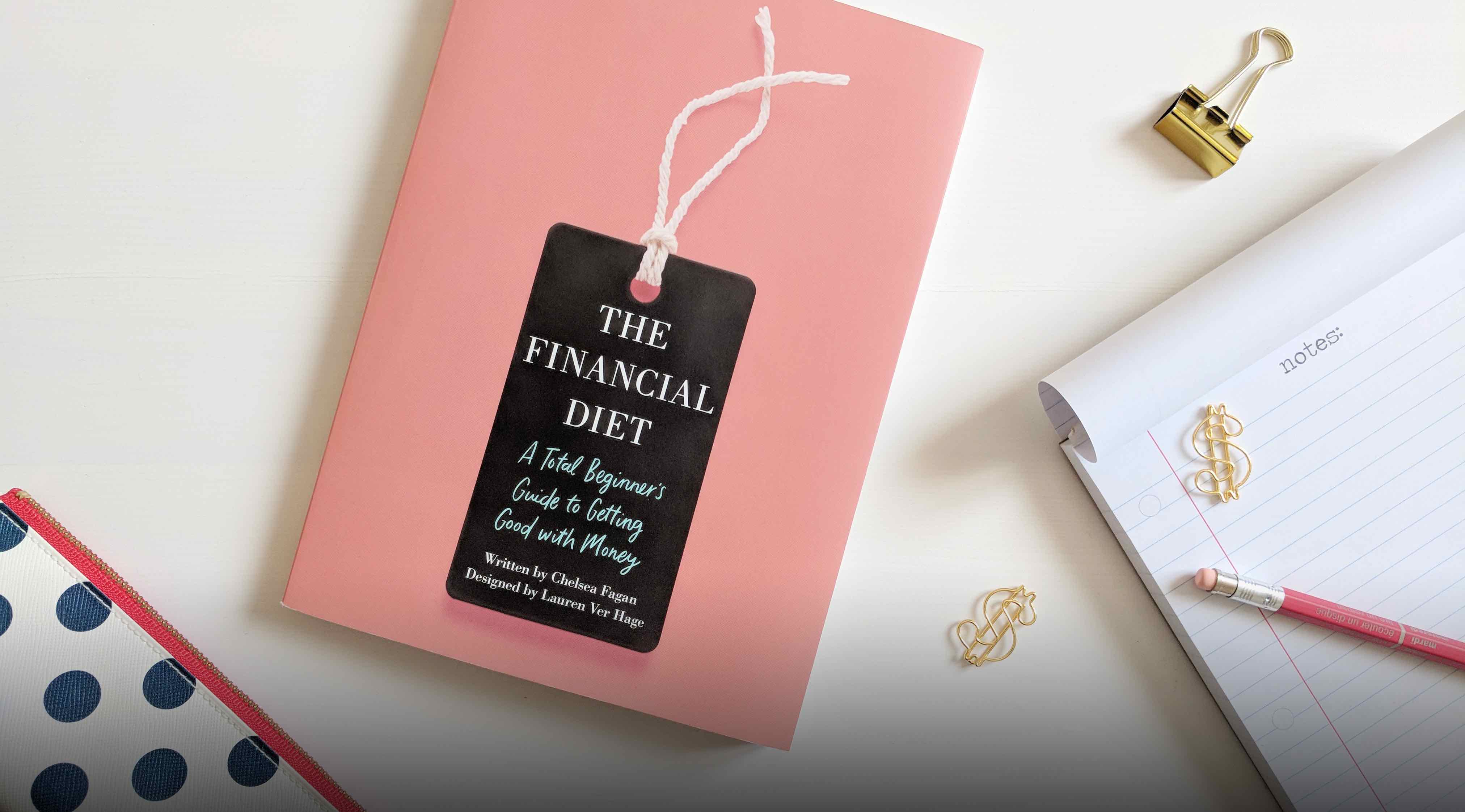 In 2014, Chelsea Fagan decided to go on a diet. What started as a personal Tumblr to track her budget and hold herself accountable grew into The Financial Diet, a popular blog and YouTube channel with a millennial bent and confessional approach to discussing money.

The eponymous book The Financial Diet: A Total Beginner’s Guide to Getting Good with Money (Holt Paperbacks, $25) makes dense financial concepts palatable and delves into how your relationship with money intertwines with career, diet, friendships, and love. Designed by TFD co-founder Lauren Ver Hage, the book is an attractively illustrated crash course in sticking to a budget, dealing with debt, and charting a financial future.

Interspersed with stories of Fagan’s own redemption from being a financial hot mess are interviews with experts (mostly women) on everything from investing and renting vs. buying a home to side hustles and creating a professional wardrobe. The book acts as a financial lifestyle guide, with sections on budgeting and investing (“be your money’s asshole boss”), career (negotiating the raise you deserve), cooking (how to be your own Italian grandmother), home (creating a grown-up living space) and relationships (broaching awkward money talks).

Writing for a generation saddled with student debt, underemployment, and rising living costs, Fagan’s tone is reassuring and practical: “Money doesn’t buy you happiness, it buys you the Lego kit for happiness. It buys you comfort, security, and options.” Rateub.ca spoke with Fagan by phone from New York.

Particularly for the millennial generation, because a huge overwhelming number of them are in debt. The average is about $40,000 in America. Every graduating class since 2008 currently has a negative net worth on average. I think a lot of the advice out there feels actively hostile to someone who is struggling to that extent financially. Also, the same generation who has all this debt also has unemployment, underemployment, and extremely bleak prospects when it comes to long-term financial decisions. The advice that’s out there is often still catered to the previous generation, who had a lot more discretionary income and a lot less debt.

It’s so easy to covet the carefully curated lifestyles of celebrities, influencers, and random bloggers. Has social media skewed what financial success looks like?

Yes, because a lot of it is about very short-term purchases — clothes, food, furniture, things like that. Unfortunately, the truth about financial health is often that if you’re really taking care of yourself financially, it doesn’t look that impressive. There’s nothing to show. You’re obviously not going to take a picture of your bank statement and post it on Instagram.

Why include a section on cooking? It’s a little unusual for a personal finance book.

For the vast majority of people, the money that they spend on food and dining is the second biggest category in their budget after rent. It’s enormous for most people. Also, millennials eat out more than any other generation, which I think is indicative of the fact that a lot of them did not get a really good home-cooking education growing up. If you’re the kind of person who eats out or orders in a lot or buys prepackaged foods, which is true of a lot of millennials, making the switch to cooking at home most nights of the week can literally save you thousands and thousands of dollars a year.

“The advice that’s out there is often still catered to the previous generation,
who had a lot more discretionary income and a lot less debt.”

You’ve held a couple of Q&As while on book tour. Were there any questions or comments from attendees that stuck with you?

We’ve only done three of our 10 stops so far, so we’ll see if this changes, but something that’s pretty interesting is the women who tend to come to our events tend to be better with money than our average reader. To be a fan of a finance site to that extent probably requires that you be actively interested in money. We get a lot of questions at our Q&As for what can you do if you’re already doing everything really well, or if you’re already very Type A and your tendency is to save too much. Ultimately, while I think we do have some answers for those people, I don’t think that will ever be the majority of our conversation. There’s almost unlimited information out there to hone your skills further once you get started, but for most people the most difficult part of money is to take those first steps and start putting the practices into play.

Personal finance tends to be a small, gated community of “experts.” What’s the reaction been to your openness, casual tone, and being a platform for sometimes unpopular opinions?

Not good. We’re not financial experts, and we don’t aspire to be. We consult with them, and we consulted with them for the book, but we don’t aspire to be Suze Orman or a CNBC anchor, and that’s the reason people enjoy reading us and watching our [YouTube] channel. Because it feels very accessible, and it’s put in language they can understand, and it’s free of judgement. But that’s not something the general finance community likes.

One of the things that’s important to remember about the finance community, particularly in America … a huge number of these people giving out financial advice are not really certified. So the community has a really vested interest in trying to gatekeep itself in deciding who gets to be an authority. Obviously, as we saw in 2008 and continue to see today, there are a lot of really sketchy people out there who will advise you against your own interest to earn a quick commission or fee off of you.

But when it comes to just day-to-day advice, I think this desire to protect the industry to a certain extent extends into making it so that average people can’t even talk about it, which I think is silly because most people are not interested in reading a straight-up dry advice book. Most people are interested in reading something that really speaks to them on their level.

Talking about money is a huge issue in relationships. What do you think is missing from discussions on money?

One thing that’s very important to consider is that men still control the vast majority of long-term financial planning in relationships, even if the woman earns as much or money. But I think part of the issue is that both sides are not going into relationships expecting to be very lucid, aware, and thoughtful about money. A lot of women are still raised in this mindset that a man is going to take care of it for them. That sets up a lot of problems, notably that eventually one partner is disproportionately controlling the money and controlling the money decisions they’re going to become the one who feels more entitled to make those decisions and feels more entitled to have the power in the relationship.

An expert we consulted with in the book recommended that every woman should have her own separate emergency fund, even in marriages. Not just because it’s good for protecting yourself if something were to happen, but it’s also very important to have an independent sense of self and also to do the independent individual work in order to save it, because does in and of itself teach you a lot. I do think there’s just a general sense of imbalance.

When we talk in the chapter about relationships, that doesn’t mean just romantic relationships. When it comes to friendships, I think friends are really, really uncomfortable with being honest with one another if they have limits on their money. We hear all the time on the site about people putting themselves into credit card debt to keep up with their friends’ social lives, and that’s incredibly dangerous and unhealthy.

The Financial Diet started as a personal blog. Now, it’s a community. What’s next for keeping the conversation on money going?

We have our book tour, we’re doing the west coast, leaving tomorrow. In March we do the middle of the country. It’s very exciting to hang out with our audience in real life. Starting later this week, we’re launching a second weekly video every Thursday, hosted by a friend of ours in the industry, Erin of Broke Millennial. They’re going to be little bite-sized three-minute videos that explain financial concepts to people. We’re really just moving into doing things that are even more accessible to people. Explaining things in a shorter, clearer format, because our Tuesday videos are usually much longer and more involved. But also really listening to our audience as we go on this book tour and seeing where we’re maybe not explaining something clearly enough. One thing that we’d really love to do later in the year is to package up easy little guides on various topics. The biggest thing for us is that we want to make sure that there’s no question that we don’t answer for people to be able to be part of the conversation.

Are there any personal finance or investing books, writers, blogs, websites that you’re into right now?

Obviously we love Broke Millennial, we’re doing a video with her every week. She has a book that came out last year called Broke Millennial as well. I would like to tell people if they’re interested in reading our book that hers is a great second step because it’s more detailed and more advanced. Desirae Odjick of Half Banked is wonderful, Mixed Up Money is another great one, and so is The Dumpster Dog. There’s a ton of wonderful women, and I only read women in the genre — I don’t read any men.

One more that I would like to shoutout that I love is a YouTube channel called One Big Happy Life, and it’s wonderful. It’s a couple who talks about the ins and outs of money, but from the perspective of they have an enormous amount of debt, and they’re both attorneys. It’s an interesting combination of both making money, but having a ton of debt. They’re both really personable and really nice to watch.

This interview has been edited and condensed.

categories: Personal Finance
tags: Debt money management Personal Finance ratehub reads saving The Financial Diet
Why you Should Shop Around for the Best Savings Account How a Tangerine Chequing Account Could Make You More Than $900