Earthquake insurance coverage includes more than seismic activity cracking your foundation and the resulting damage to contents within your home. It also covers ‘Fire Following’, meaning if a gas line breaks as a result of the earthquake which causes a fire, you have protection. If your house is built on sandy soil, it may also cover landslides and liquefaction which could cause your home to slip into a sinkhole creating severe foundation problems. You may also be entitled to additional living expenses which pays for you to live elsewhere while your home is being repaired. Despite its sudden occurrence resulting from an earthquake, earthquake insurance doesn't cover tidal waves or tsunamis. Ask your insurer if their flood insurance policies would cover you for those situations.

When speaking with your provider about adding earthquake coverage, be sure to ask about any potential gaps in coverage. If your home was flooded as a result of a burst pipe from the earthquake, would regular home insurance protect you or would you need special flood insurance? Sometimes a fire following an earthquake is included in a standard policy. Ask your broker or insurance provider about limits on the contents insurance portion of your policy, and if so, should you increase it? Always seek clarification from your insurance broker or agent.

The cost of earthquake insurance varies based on your risk. Square One Insurance, a specialty home insurance provider in Vancouver, gave us some annual estimates for major cities across Canada based on a house worth $300,000 and its contents.

Each year, Canada experiences around 4,000 earthquakes. You can view all Canadian earthquakes, and their magnitudes, in the last 30 days here. Most are small and imperceptible to humans, but over the last 3 centuries there have been at least 24 earthquakes with a magnitude greater than 5.0. In the image below, you can see most of the major earthquakes happen in British Columbia. According to the Richter scale, anything above a magnitude 6.0 is enough to cause major damage. An earthquake above 8.0 can destroy entire communities near its epicenter. 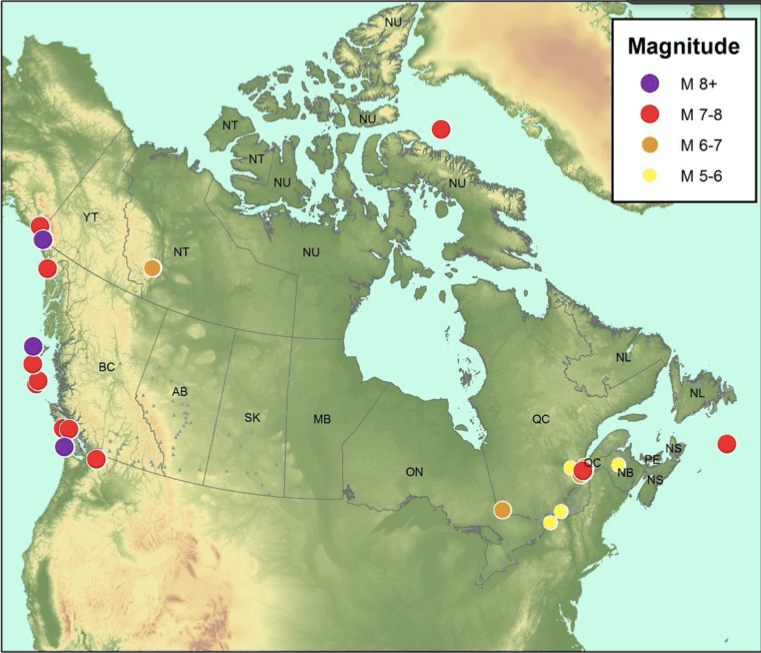 In IBC’s study, researchers suggested a 9.0 magnitude earthquake hitting British Columbia would result in total damages of about $75 billion dollars. They also created a model for the Ottawa, Montreal, and Quebec city corridor where a 7.1 magnitude earthquake would result in $65 billion dollars in damages. Despite it being a relatively small area in relation to all of Canada, 40% of Canadians live in earthquake zones.

According to government studies, by 2054 (or within the next 34 years) there is a 12% and 21% chance a magnitude 7.0 earthquake hits Vancouver and Victoria, respectively. There is a 5-15% chance a structurally damaging earthquake hits St. Lawrence River valley to the Ottawa Valley, including Quebec City, Montreal, and Ottawa.

When a magnitude 7 earthquake strikes, a well designed building will have minor damage. The damage will be considerable in poorly built buildings. You can expect cracked chimneys and fissures in exterior brickwork, drywall and plaster falling off the walls, and heavy furniture and appliances to be overturned.

Living near a danger zone is cause for concern, especially if you can’t afford the high deductible should an earthquake occur. Compare your perceived risk of experiencing an earthquake, the quality of your home’s structure, and your financial situation following a catastrophic event.

Currently, the federal government doesn’t provide much financial aid to victims by way of a disaster relief fund, but you may be limited to low interest loans (which you have to pay back).

Limiting the damage an earthquake may cause is a smart way to reduce the financial burden.

Here’s some quick tips to help earthquake proof your home:

As long as you have comprehensive car insurance, a common add-on to any policy, then yes, your car has protection from earthquake damage.

Does earthquake insurance cover a tsunami?

No, earthquake insurance does not cover a tsunami. Ask your provider about overland water coverage which may offer protection depending on the insurer.

Unless you live in an earthquake zone, earthquake insurance is not a requirement.

Do I need earthquake insurance as a renter?

If you live in an earthquake zone, it's a good idea to have it. Renters insurance provides coverage for your valuables inside your apartment and additional living expenses in case you need to live elsewhere while the home you’re in is repaired. Without earthquake insurance though, your standard renters policy may not cover you against this peril. Ask your provider.

How Much Is Car Insurance in Toronto?

Can You Get Life Insurance After a Stroke?

Driving Less Due to Gas Prices? Ask for a Car Insurance Discount

How Has Inflation Affected Home Insurance in Canada?

Inflation in Canada – What It Means for Your Auto Insurance

How Much is Health Insurance in Canada?

A wealth of wealth knowledge delivered right to your inbox

Whether you need a mortgage, credit card, savings account, or insurance coverage, we help you find and compare the best financial products for your specific needs.

When it comes to mortgages, Ratehub.ca is more than just a place to research and compare the best rates. Our goal is to give Canadians the best mortgage experience from online search to close. This means offering Canadians the mortgage tools, information and articles to educate themselves, allowing them to get personalized rate quotes from multiple lenders to compare rates instantly, and providing them with the best online application and offline customer service to close their mortgage all in one place.

Ratehub.ca has been named Canada's Mortgage Brokerage of the Year for four years straight (2018-2021). With over 12 years of mortgage experience, and over $11 billion in mortgages funded, we deliver you the best mortgage experience in Canada.

Financial institutions pay us for connecting them with customers. This could be through advertisements, or when someone applies or is approved for a product. However, not all products we list are tied to compensation for us. Our industry-leading education centres and calculators are available 24/7, free of charge, and with no obligation to purchase. To learn more, visit our About us page.