Don’t Have a Million Dollars? Townhouses May be the Answer 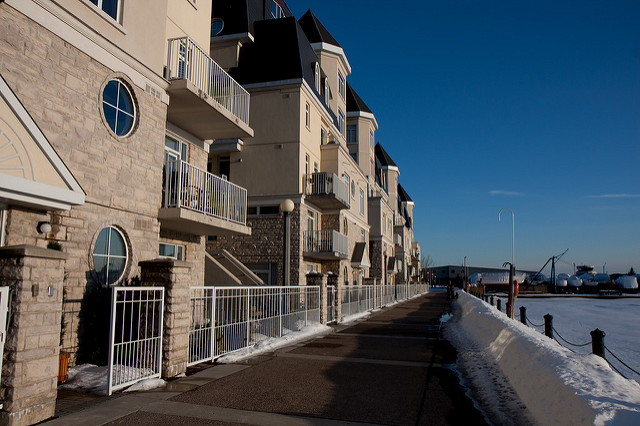 Planning to move to the suburbs in order to break into the housing market? You’ll still need a million dollars to purchase a detached house, reveals the February numbers from the Toronto Real Estate Board (TREB).

It’s one of two expensive milestones achieved in the Greater Toronto Area (GTA), reports the board, as houses within Toronto proper now exceed the $1.5 million mark. For prospective homebuyers considering their “drive-to-qualify” options, one thing is clear—the market for homes across the Golden Horseshoe, including London and Hamilton real estate, is heating up.

Too few listings coming to market

The biggest issue, according to TREB, is a supply crunch that has spilled far beyond city limits. Just 793 detached house transactions occurred in February due to lack of listings as the inventory hit a 15-year low.

“The listing supply crunch we are experiencing in the GTA has undoubtedly led to the double-digit home price increases we are now experiencing on a sustained basis, both in the low-rise and high-rise market segments,” said Jason Mercer, TREB’s director of market analysis. “Until we see a marked increase in the number of homes available for sale, expect very strong annual rates of price growth to continue.”

While being the first to purchase a newly built home typically offers cost savings, that’s no longer the case with low-rise dwellings, reports the Building Industry and Land Development Association (BILD). Low-rise housing—whether it be detached, freehold rowhouse or semi—are now going for above $1 million, as they’re snapped up faster than builders can hammer them together.

“The GTA is facing a severe shortage of housing supply, particularly for single-family homes, which sell as soon as they come to market,” stated BILD president and CEO Brian Tuckey. “When there aren’t enough homes to satisfy demand, prices increase and that is exactly what has been happening in our region over the last decade.”

The answer, according to him, is to cut down on the “excessive red tape” within the home development industry, improve the amount of serviceable land, and move along the frequently delayed approval process. Tuckey also calls upon developers to put a stronger focus on higher-density housing as per the Government of Ontario’s mandate.

So what can the average homebuyer, who likely doesn’t have a $1 million sitting around, do to break into the housing market? The tough reality is that real estate price growth has far eclipsed that of wages in the region. The median Toronto household income is $76,219, according to the 2011 Census. In terms of mortgage affordability, assuming the borrower has great credit, qualifies for a 2% variable-rate mortgage, has a 20% down payment and an amortization timeline of 30 years, that would still only qualify them to borrow $636,886. Even in a best-case scenario, our hypothetical homebuyer is still hundreds of thousands of dollars away from being able to afford a detached house in the city.

While condos are becoming a more popular solution for families and first-time buyers alike, high-rise living isn’t for everyone. That’s where townhouses come in. According to 2016 sold home data compiled by Zoocasa, the average townhouse can still be purchased for $552,187—still within reach of Toronto’s median homebuyer.

Check out the infographic below to see the 20 most affordable neighbourhoods to purchase a Toronto townhouse, the average price per area, and number of bedrooms.