What You Need to Know Before Buying an Engagement Ring 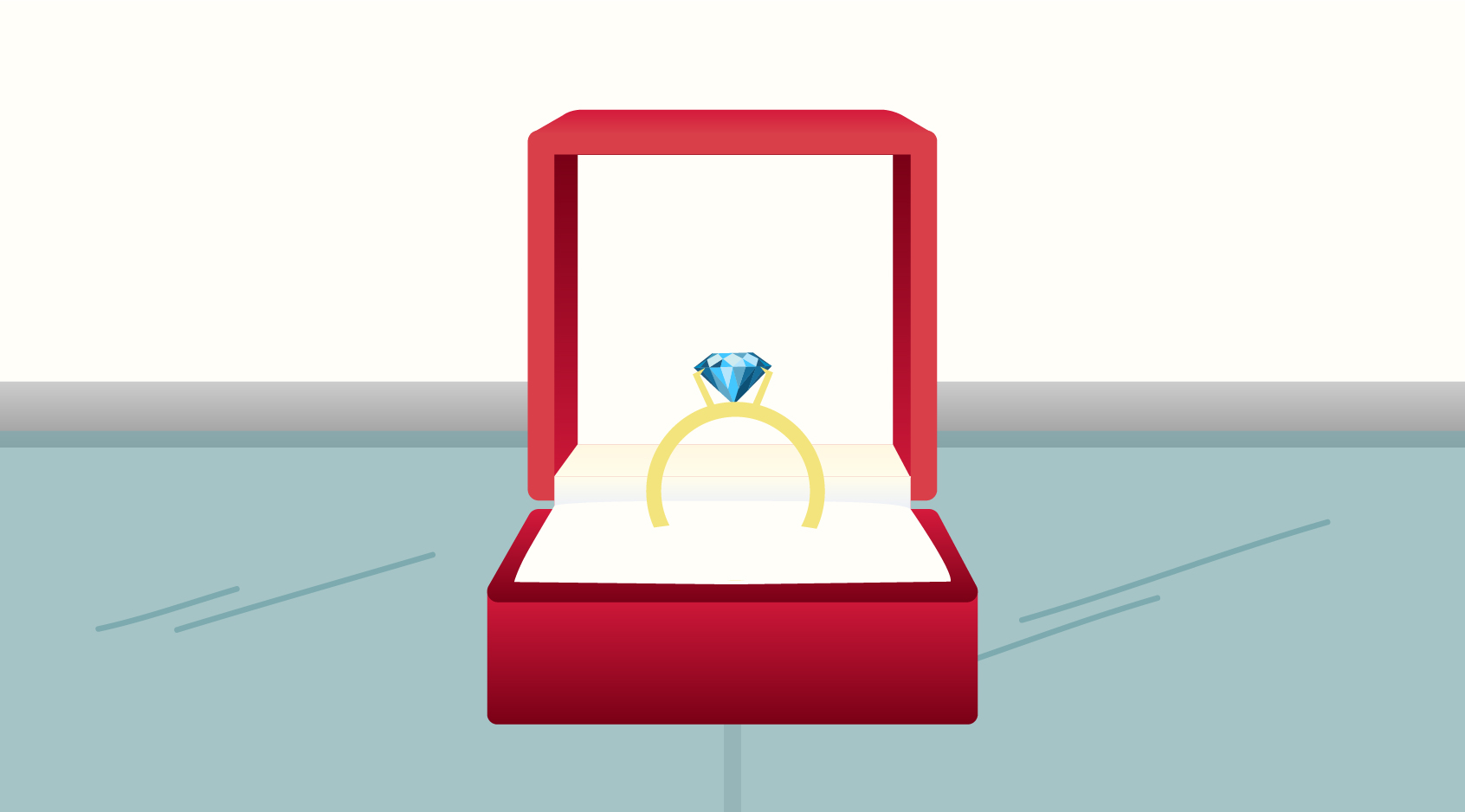 When Daniel Maggiacomo proposed to his then-girlfriend, he didn’t stress over the engagement ring.

As the co-owner of Glitz Jewellery in Vaughan, Ont., all he needed was a few inspirational photos to suss out what she wanted. Then he got to work designing the ring.

If you don’t happen to design jewellery for a living (or have the good fortune of marrying someone who does), there’s a good chance an engagement ring will be your first major jewellery purchase. It also can be one of the first big financial decisions a couple makes together. With so many price points and variables, here’s a guide to what you should know when shopping for a ring.

First, get an idea of what you want. Whether you’re just dropping hints or part of the actual shopping process, you need to nail down the basics: The type of stone (plus shape and cut), the ring’s setting, and the type of band.

Pinterest, Instagram, and Facebook are great not just for style inspiration, but scoping out designers and jewelers. As you begin to pin, heart, or save photos, you’ll start to see commonalities in styles you’re attracted to.

“We get a lot of business off our Instagram page, which is why we spend a lot of time on it,” Maggiacomo says. He estimates engagement rings make up about 30% of his family’s jewellery business, but grab the most attention on social media. “I would say 50% of people come in off Instagram.”

Diamond giant De Beers effectively single-handedly shaped modern engagement ring culture through its seminal marketing campaigns: the iconic phrase “a diamond is forever,” the idea that an engagement ring is an “investment,” and the “rule” that a ring should cost a man two months’ salary. While good for the company’s bottom line, these aren’t hard and fast rules.

A diamond ring definitely isn’t an investment—at least, not by the definition of money spent with the goal of a future profitable return. It has emotional value, for sure, but it’s something you should buy with the hopes of keeping forever and passing on to a loved one.

Having a budget is a good place to start, but Maggiacomo likens it to buying tires when you’ve never owned a car. If it’s your first time making a major jewellery purchase, shop around so you get a sense of the market and see how far your money will go. You can find a smaller, solitaire diamond set on a plain band for under $1,000, with the price increasing based on variables (carat, setting, metals, extras like halos and studded bands).

“Get educated first, then set yourself a budget,” he says. A 2015 survey by Weddingbells magazine found the average expected cost of an engagement ring to be $3,125, but again, there are no rules—don’t be pressured to spend more than you can afford. Even as a jeweler who designed his own ring, Maggiacomo made a budget and saved up to create the ring he wanted. “I spent the most amount I could be comfortable with spending.”

As with anything in a relationship, communication between the couple is key. “Women will be happy with pretty much anything along the lines of they described—it doesn’t have to be exact,” he says.

Shop at retail bigwigs like Birks, Cartier, Harry Winston, or Tiffany & Co., and you’ll pay brand-name prices.  For example, expect to shell out at least $16,300 for a one-carat diamond in the classic Tiffany setting with a yellow gold band, and upwards of $82,000 for a 2.5-carat round diamond encircled in a halo of smaller diamonds and a diamond-studded band.

Of course, if that’s what you want (and you can afford it), there’s absolutely nothing wrong with coveting that little blue box. Regardless of what you end up choosing, it’s best to shop around, compare designs and price points, and of course, try rings on—you might be surprised at what actually looks good on your finger.

Consider an independent designer, who can offer a more personalized experience to create a ring you may not otherwise be able to afford at a big retailer. Some have a storefront, like Maggiacomo’s Glitz Jewellery, while others operate by appointment.

“I don’t have the overhead and direct costs that are typically incurred by larger retailers, says designer Amy Follwell of Toronto-based Bijoux by Amy. “This allows a client’s budget to go much farther.”

Follwell, a certified gemologist with stints at Tiffany & Co. and auctioneer Christie’s, says you can save 30-50% by going with an independent designer compared to a major retailer. She begins the process by meeting with clients to discuss budget, style, and a timeline. After the initial consultation, she presents the client with a few customized designs, refining their preferences until they have the ring they want.

“There are many variables that can drive up the cost of the ring including metal used, size and number of diamonds as well as the intricacy of the design.”

Ultimately, you want a designer who makes you comfortable by listening to what you want, staying within your budget, crafting a design you love, and keeping you updated throughout the process. Remember, you’ll be coming back to them for cleanings or repairs.

What to look for in a diamond

A diamond’s quality is measured by the four Cs: Colour, cut, clarity, and carat (weight). Maggiacomo says size is secondary to a “well-balanced” stone, meaning it hits the same scales in terms of colour, cut, and clarity. The cut grade is the most important factor, because proportionality determines a diamond’s sparkle and brilliance. For clarity, Follwell says a diamond should be “eye clean”—free from any noticeable imperfections—and shouldn’t appear brown or yellowish when viewed from above.

If a tight budget means making concessions, Maggiacomo says you shouldn’t sacrifice quality to get a larger diamond.

“If people are on a little bit of a budget but they want that better stone, I always tell them put the money in the stone for now, because that’s the one thing you have forever,” he says, noting that the band and setting can be changed in the future.

A lesser-known trick suggested by Follwell: Buying a diamond weighs slightly less than the “magic sizes,” referring to the most common weights of 0.50, 0.75, and one carat.

Follwell says the main diamond should come with its own certification describing quality and authenticity. “Insist that your centre diamond has a report from a reputable gemological laboratory,” such as the Gemological Institute of America, she adds.

There’s no “right” way to be engaged

Traditions are changing—and that’s not a bad thing. Both Follwell and Maggiacomo say the boy-buys-girl-ring paradigm is still alive and well, but 12 years of legalized same-sex marriage in Canada and the fact that millennials are also getting married later has shifted things. It’s not uncommon to buy a house or have a baby together before getting hitched—if they get married at all. Some couples might forgo the ring all together, go vintage, or wear a family heirloom.

When they decided to get married in 2015, rings were an afterthought for Toronto couple Matt Rushworth and Laura Callow. After his father was diagnosed with terminal cancer, the couple decided to plan a wedding in five months on a limited budget.

“Our main priority was everyone being comfortable and having fun on our wedding day, and no piece of jewellery would have helped that,” he says.

The decision was mostly financial, and the couple has mused on getting custom-made matching rings in the future. For now, they’re happy wearing mementos from the day they made it official.

“As for an emotional investment, I think we’d rather put that energy into the person wearing the ring, not the material or look of the ring itself,” Rushworth says.

There was no surprise proposal for Hamilton, Ont., couple Rachelle Waterman and Ben Motz—and no ring. After dating for five years and owning a home together for two, it seemed like a natural next step to simply start planning their wedding.

“I didn’t want to wait around for someone to ask me, when we already knew we wanted to spend our lives together,” Waterman says.

“I’ve heard from a lot of friends that they feel like in a few years, they’ll probably just wear their band instead of the diamond engagement ring,” she says. “I don’t feel like that at all—both my band and engagement ring are so understated. I don’t ever want to take them off.”

In the market for wedding insurance?

Connect with a special event insurance broker to review your wedding insurance needs for free.

When your ring outlasts your marriage

Canada’s divorce rate for first marriages is roughly 40%, according to Statistics Canada—a figure you shouldn’t trot out at engagement parties unless you want major side-eye. Unfortunately, there’s a chance your ring could outlast your marriage.

Allison Simpson (who asked that her real name not be used), a Toronto realtor, got engaged to her fiancé within a couple of months of meeting. They went shopping for her engagement ring before even telling anyone, a “super fun experience” that had her trying on rings at several high-end stores.

The financially comfortable couple didn’t have a budget, and weeks after their shopping trip, he proposed with an $18,000, one-carat diamond ring from Tiffany & Co.

When their marriage ended six years later, the split was so amicable the couple didn’t even use lawyers: After a three-minute conversation about dividing their assets, her husband told her to keep the ring as a gift. The two remain friends, and the first Christmas after they split up, Simpson was in a unique position to clear the slate: She wrote him a cheque for $20,000, rounding up as a goodwill gesture.

“I said, ‘This isn’t a gift, this is me buying the ring,’ which made me feel a lot better about it, because now I can make whatever decision I want with it.”

Unsure of what she wants to do, the ring now sits among her other jewellery. She recognizes there isn’t much of a resale market—diamonds do have a secondary market, but it’s largely illiquid. A high-quality, well-balanced diamond will hold its value, but if you sell it you’re likely to recoup only about one-third of the retail price. From a business perspective, can you imagine if jewellers agreed to buy back 40% of all rings?

Simpson still considers it a beautiful ring, and it’s a symbol of a time in her life she doesn’t regret. But having come out the other side, Allison advises couples to think about getting caught up in the “trappings of marriage”: The whirlwind of planning a wedding, the “princess” feeling, and attraction to material comfort.

“There’s a lot of loaded stuff that comes with something that should just be jewellery. But it’s not,” she says. “If you’re desperately in love with someone, it’s not about money.”

While open-minded to getting remarried in the future, Simpson says she’s happily single and focused on her career. A diamond ring might be associated with getting engaged, but you don’t have to get married to buy yourself jewellery.

“I intend to have the ability, if not actually do it, to purchase myself as many rings as I want, and wear as many as I want.”

Top 5 ways to save on an engagement ring