Canada’s housing market is a hot topic of conversation. It was also one of the topics at the 2016 Canadian Personal Finance Conference.

Here’s a highlight of what the panelists—Rob Carrick of The Globe and Mail, Romana King of MoneySense, and Lauren Haw, CEO of real estate brokerage Zoocasa—discussed on the weekend:

Housing prices in Canada have been on a tear for the last few years. However, most of that’s due to price increases in Vancouver and Toronto. The panelists agreed that Toronto is overpriced but it’s not the case in all markets.

Carrick believes there will be a housing correction but it won’t be a large correction. And if government bond yields rise [which will lead to higher fixed mortgage rates], Carrick expects some buyers will have to rethink whether or not they bid on a home.

Haw added that prices in Toronto can’t continue at this level forever. While people with higher incomes can afford to get into the market, she said not everyone can buy a detached home that’s within walking distance of their office; they need to make a trade-off.

King noted that Thunder Bay, Ont. was named MoneySense’s top city to buy real estate in this year. And a number of cities near Toronto (Barrie, Hamilton, and Brantford) also made the list. 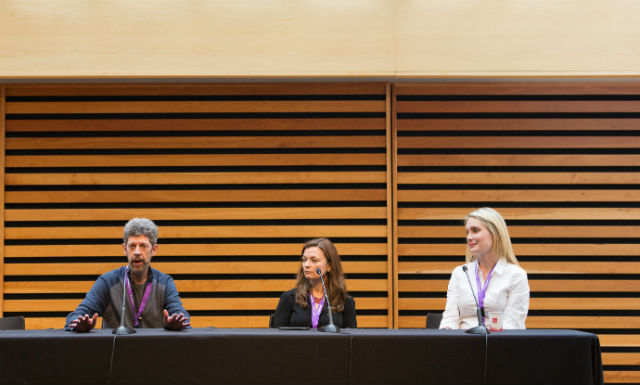 Buying for the long term

The panelists agreed that real estate should be considered a long-term holding. Carrick said buyers should follow the 10-year rule and own a home for at least 10 years. He noted that some first-time homebuyers are purchasing a property with two bedrooms and may run out of space if they decide to have children.

King agreed that 10 years is a sweet spot for homebuyers, adding that buyers should purchase a property that suits their lifestyle.

One strategy first-time homebuyers can take, said Haw, is to purchase a big home and put in a basement apartment. That way they won’t need to move and can afford to take on a larger mortgage.

Although many Canadians want to own a home, Carrick believes renting will be a good fit for some people. While renting, he added, they can build up their savings.

Haw said renting isn’t always cheaper than buying. She noted that people have to make their own investment decisions when saving. But if you have to rent, Haw added that houses often rent for much less per square foot than a brand new condo.

In Toronto, the rental situation is tightening. Many renters can’t find a place and some are paying more than they should, Carrick said.

Haw said one of the problems with the market is due to rent control. But it only applies to units built or occupied before Nov. 1, 1991. As a result, developers stopped building rental properties and instead built condos or townhomes.

According to the Toronto Real Estate Board, the number of condo apartments listed for rent fell by 17.3% in the third quarter of this year compared to the same period in 2015. At the same time, the average one-bedroom rent rose by 7.2% to $1,777 and the average two-bedroom rent increased by 7.9% to $2,419.