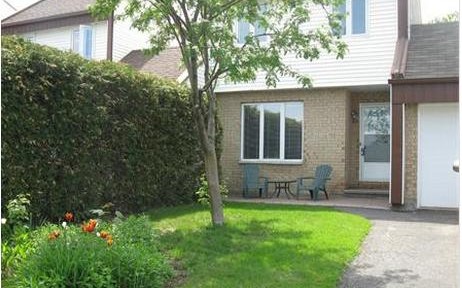 This three-bedroom, one-bathroom starter home in Gatineau features an updated kitchen and new laminate flooring throughout, with a price just right ($219,900) for many first-time buyers.

Our starter home series is gradually moving east and with this post we’ll be exploring the province of Québec. Speaking to realtors from Montréal, Québec City and Gatineau, it is clear that many young professionals are moving to the province in search of new job opportunities. But what we discovered about one city is that you don’t need to work in Québec to live in Québec.

Gatineau is located near the Québec-Ontario border, just north of Ottawa. In the low $200,000 range, first-time buyers can get themselves into two- and sometimes three-bedroom townhouses in Gatineau. And with less than a 20-minute commute from Gatineau to Ottawa, young professionals and couples are able to find affordable housing options in Québec while continuing to work in the nation’s capital.

In fact, between 2001 and 2007, Statistics Canada found that more people were moving from Ottawa to Gatineau. While some taxes in Gatineau are higher than Ottawa, these are often subsidized for families with kids by way of a generous child tax benefit and standardized low-cost daycare expenses.

“Parents who earn $50,000 a year each and have two children could save $6,000 a year in taxes and daycare expenses if they live in Gatineau,” said Marc Lamontagne, from Ryan Lamontagne Inc.

For those who want to live and work in the province’s capital, the average price of a starter home in Québec City is $250,000. For that price, a first-time buyer can get themselves into a 2-3 bedroom home located roughly 30 minutes away from the city. The one thing buyers need to consider before purchasing a home in Québec City is their method of transportation.

“Québec [City] doesn’t have a subway so, although there are lots of jobs and young professionals, transportation can be an issue for people moving here,” said mortgage broker Dumont Francis.

The one city in Québec that does have a subway system is Montréal – and thank goodness, because starter homes in Montréal are often 45-60 minutes outside of the city (and that time can double in rush hour, if you’re driving). Realtor Jonh Dunford explained that most people in Montréal bus, metro or walk – which he referred to as “BMW”.

First-time buyers will also be looking at condos in the $300-400,000 range, in comparison to the more affordable townhouses available in Gatineau and Québec City.

“80% of homebuyers in the area are first-time homebuyers [and most are purchasing condos],” Dunford explained.

Dunford added that the Montréal market is currently a buyer’s market, as there are many homes on the market and they are not selling fast enough. This is good news for first-time buyers, but is a major issue for homeowners interested in selling as they will most likely be doing so at a lower price.

To give you a better idea of what a starter home looks like in these cities, we’ve created a comparison chart using real homes listed on MLIS.

Deciding where you want to buy your first home is an important decision – one which takes a lot of thought and consideration. Living in a suburb is not always the best fit for first-time buyers, as some enjoy the busy city life. For those willing and able to make the commute, living just outside one of these metropolitans is also a great move. Whichever city you decide to choose, finding a home in Québec’s real estate market can be tricky and requires a lot of research.

If you’re thinking of getting into the market soon, talk to a mortgage broker today. And if you’re already close to buying a home you should begin looking for a home inspector in Ottawa and a real estate lawyer in Ottawa.

categories: Mortgages
tags: Montreal Quebec starter home
How to Qualify for a Mortgage if You’re Self-Employed Calculate the Mortgage Payment on an Average Home in Québec