An at-fault parking lot accident can increase your insurance premium substantially. So compare car insurance quotes with us to find your lowest rate today.

Parking lot accidents suck, and there are many ways in which they happen. A few examples: a hit and run in a parking lot, backing up into another car, or just bumping into a parked car. What do you do, and maybe the aching question, who’s at fault?

I remember casually remarking, to a friend of mine, “Oh, aren’t you fancy backing into a parking spot.” He told me as part of his training, he must always reverse into a parking spot. According to Hydro One (Ontario’s leading electricity provider), backing in is a practice that resulted in a 9% decrease in parking lot accidents.

In less than five minutes, you can compare multiple car insurance quotes from Canada's top providers, free of charge.

A parking lot is not subject to Ontario’s highway traffic laws, but they use some of the same tactics you can find in these old school images. And even though a parking lot accident in Ontario, Alberta, or anywhere happens on private property, it doesn’t give you the right to damage another car or the owner’s property.

No-fault insurance is everywhere in Canada. It means that you deal with your own insurance company for any claim. While you may report the parking accident to the police, it’s your insurance company that determines fault. Fault can range from 0% to 100%, but it’s a myth all parking lot accidents are 50-50.

In general, the car that’s moving is at fault, especially if the other vehicle is stationary. If both vehicles are moving, it comes down to which driver has the right of way.

Let’s look at any parking lot accident to find out who’s at fault based on fault determination rules. 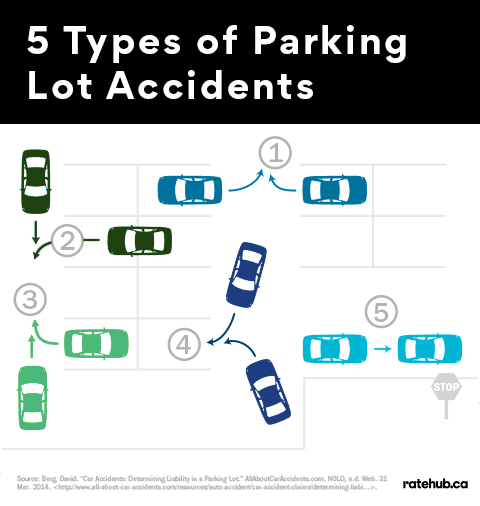 1. Two drivers back up into each other

2. A driver pulls forward out of a space and into the traffic lane

In this instance, both cars are moving, so they’re likely to share the blame. In a parking lot, technically, there is a traffic lane that has the right of way. The majority of the fault will lie with the driver pulling out of the parking spot. This could be a 75-25 split.

3. A driver backs out of a space into an oncoming car

Again, both drivers share responsibility, but the driver backing up doesn’t have the right of way and should wait until it’s safe to back out. So, they’ll be mostly at fault.

So, both vehicles are moving, but one of them has to turn across traffic, a left turn, whereas the right turning driver doesn’t have to wait. The left-turning driver should yield to oncoming traffic, and due to this failure will hold most of the fault in the collision. Other factors will be necessary, such as how far each vehicle was into the spot and the speed of each vehicle when the parking spot accident happened.

Whether in a parking lot accident or on the road, if you bump into a parked car from behind, you will bear the brunt of the fault. Even if the driver performs an unexpected stop, the vehicle in motion should have given enough distance between their car and the one in front to avoid rear-ending the stopped vehicle.

If you hit a pedestrian or cyclist, you’re likely at fault. It’s all 100% your fault if you hit a median, curb, shopping cart, or traffic sign.

A hit & run in a parking lot accident is terrible because if you’re not able to identify the driver, you’ll be on the hook for the repair bill. We’ll look at both angles.

Someone hit my parked car and left

From a ding to a scratch, to a $500 bumper repair, if your car was hit in the parking lot, it’s unfortunate. For a hit-and-run in Ontario, where you can’t identify the driver, it falls to your collision insurance. If you have it, you’ll have to pay a deductible (the part you pay before your insurer pays the rest) between $500 to $1,000. If the damage is worth less than the deductible, there’s no sense making a claim, and you’ll be out of pocket. Your auto insurance provider may put it under uninsured auto, and assume the fleeing driver didn’t have insurance, and you wouldn’t pay a deductible.

If the store’s cameras, however, can identify the driver, in provinces where direct compensation property damage (DCPD) exists, your insurer will pay for the loss.

I hit someone and drove away

How you handle any hit and run in a parking lot is with proof. If you drive away, shame on you; karma usually wins. Practice compassion and leave a note with your contact information to sort out the details. Otherwise, if the cameras are rolling, and they can identify you, that’s called “fail to remain.” Failure to remain at the scene of an accident carries a fine between $400-$2,000, seven demerit points, possible license suspension, and a significant increase to your car insurance rates.

After ensuring there are no injuries, move your car to safety and out of the way. Call the police if there is personal injury or damage over $2,000. According to your auto policy, you must inform your insurer.

The police will want to know your name, address, insurance information for anyone who has damage to claim – this could be you, but also the parking lot owner.

If you’re in a parking lot fender bender, no, you don’t have to file a police report if there are no injuries, and the damage is under $2,000.

Slow down, be cautious, and try to park in more open areas away from the bulk of the cars. Not only will the exercise do you good, but you’ll also benefit from a reduction in the possibility of a parking lot accident. Should you be found at fault, your rates may go up, if they do, get a new car insurance quote to see if you can find a better price.