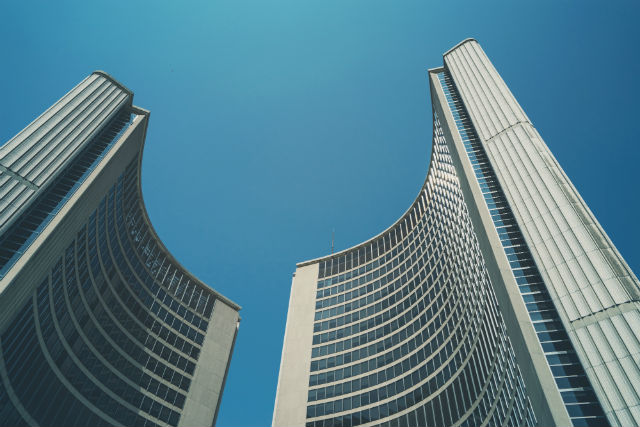 Turn the clock back roughly three years and ‘glut’ was the popular term to describe Toronto’s condo market. Between the bevy of construction cranes, numerous high-rises breaking ground in all corners of the city, and headlines of record levels of unsold inventory—it’s easy to see why.

However, as supply of new high-rises from condo developers have dipped to new lows and resale listings of apartments are tightening, today, real estate insiders are tooting a different horn.

And for good reason.

Between October and December 2016, the latest quarter for which MLS sold data is available, the average price of a condominium across the Greater Toronto Area (GTA) shot up 14.5%—a significant climb compared to the usual single-digit annual increases normally associated with the high-rise sector.

For condo hunters looking to live in downtown, the average cost of a condo now sits well above the half-million dollar mark.

Rather than stop and just provide a broad citywide snapshot of the condo sector in Canada’s largest metropolis, TheRedPin isolated Toronto’s six most prominent high-rise neighbourhoods to give condo buyers in the city a better idea how much prices can vary from one community to the next. Given the neighbourhoods on this list are based on the Toronto Real Estate Board’s boundaries, which aren’t colloquial to most Torontonians, each area features descriptions that broadly outlines their location in the city.

While not prime downtown territory, the community of Niagara is the next best thing, with a convenient location that sits just a few minute’s streetcar ride west of Toronto’s core. From Liberty Village and Fort York, to smaller pockets of Queen and King streets, Niagara is among Toronto’s top destinations for condo hunters.

This huge swath of land sits directly adjacent to Lake Ontario and boasts some of downtown’s top nightlife, dining, and entertainment destinations—from King Street West to the Fashion District.

Bay Street, among Toronto’s busiest and most prominent thoroughfares, anchors this namesake intersection. Crowned the most walkable neighbourhood in the entire city by Walk Score, condo owners and renters alike can find hundreds of restaurants within a few minutes’ walk of their residences. Also nearby is the Eaton Centre as well as popular tourist destinations such as Nathan Phillips Square.

A considerable strip of the city’s downtown east, the Church-Yonge Corridor reaches as far as Bloor Street East to the north and Front Street on its southern most point. Along with being the neighbourhood that the ever-expanding Ryerson University calls home, residents of this area also have easy access to the Eaton Centre as well as the 85,000 square foot Maple Leaf Gardens, which was converted into a Loblaws.

Among uptown Toronto’s top condo hubs are found within Willowdale East’s borders, including Yonge and Finch, Yonge and Sheppard, and North York Centre.

West of Humber Bay, Mimico is unique to this list, as it’s the only major condo hub located well beyond the borders of the city’s central strip.