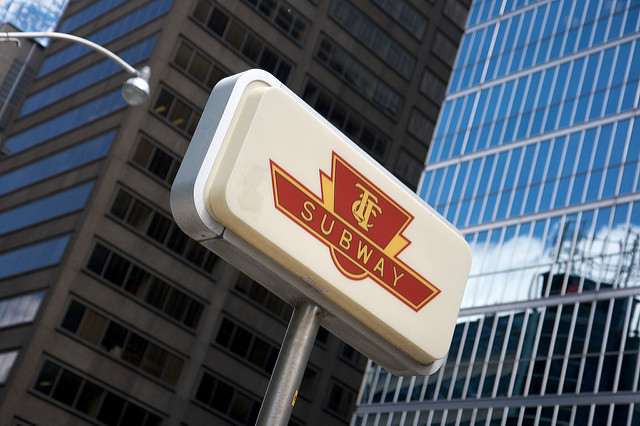 Homebuyers often have a list of must haves on their wish list. In Toronto, a non-negotiable one is “steps to the subway.” But how much does it really cost?

Often used interchangeably with another famed mantra “location, location, location,” the notion that property prices climb higher the closer they are to public transit is often met with a few “well duh, water is wet” responses.

Yet, rather than simply agree that homes near the subway are more expensive, TheRedPin.com addressed the question of exactly how much more.

After analyzing sales for condominiums and single-family homes in Toronto for the 2015 calendar year, the brokerage pitted prices of homes within a 10-minute walk of prominent subway stations against city-wide averages for the same timeframe.

What we found was that condos within walking distance to stations were 14% more expensive than Toronto-average prices, while single-family homes were 15% higher. That’s close to a $55,000 and $132,000 difference, respectively.

Condos along the Yonge-University line were easily the most expensive, with average prices hovering around $542,451—close to $130,000 more than the city-wide average

The concept of living next to the subway is particularly important to millennials and first-time buyers eyeing condos in the city who often sacrifice square footage to squeeze (both physically and budget-wise) into units that offer easy access to the subway.

Toronto condo prices near the subway

Condo construction is often focussed around subway stations—both current and those soon to be. Developers are already setting their sights along future transit lines across the Greater Toronto Area, such as in the city-suburb of Vaughan. Traditionally dominated by single-family homes, towering high-rises such as The Met (35 storeys) are now planned to take shape in Vaughan, spurred on by the future $2.6 billion Toronto-York subway extension.

For home hunters currently looking to live next to the subway but still pay below-than-average city-wide prices, here’s a list of the stations you’ll want to look at:

TheRedPin.com is a full-service real estate brokerage that carries the largest database of residential listings in the Greater Toronto Area. Sign up to its newsletter simply by clicking here.