The best bank accounts in Canada for international travel 2020

Travelling to the United States or Europe can be quite costly, especially for Canadians. Considering expenses, travel insurance, and foreign exchange rates, in addition to ATM and admin fees, it’s easy to gather a hefty amount of charges from your bank that’s better spent on making the most out of your trip.

That’s why the Ratehub.ca team put its travel cap on to conduct a competitive audit and found out what are the best bank accounts for international travel.

After some intensive research, we found out which bank from Canada’s big five helps stretch your dollar as much as possible when you find yourself across the border or overseas.

Below, we’ll take a look at some of Canada’s best banks for international travel, focusing on the best major Canadian banking institutions.

Since the foreign exchange rate impacts the final amount of funds you receive, Scotiabank’s competitive rates make Scotiabank chequing accounts among the best bank accounts for international travel and a leading option for people looking to withdraw money abroad.

Scotiabank’s chequing accounts cost the least amount of money when withdrawing cash in Europe or the United States of America, assuming you withdraw funds from an ATM belonging to the Global ATM Alliance network.

Scotiabank’s association with the Global ATM Alliance network allows its customers to withdraw money without the additional surcharges that come from making a transaction with an institution that is not in the alliance.

Scotiabank also has a massive presence in South America and the Caribbean, with branches in Mexico, Chile, Peru, and Jamaica. There are around 44,000 ATMs across the globe.

If you’re wondering how to find a partnered banking institution across the globe, Scotiabank’s Mobile Banking App features an ATM locator that can quickly guide you to the closest partnered ATM, whether you’re in North America, Europe, or anywhere else in the world. All things considered, Scotiabank truly is one of the best bank accounts for international travel available on the Canadian market.

CIBC’s chequing accounts offer similar perks to Canada’s major banks. In partnership with Visa’s Plus or Visa Network, CIBC bank accounts allow their customers with a CIBC Visa Debit card to access funds using an ATM in the Plus Network around the world. Most of the best bank accounts for international travel are a part of this ATM network.

Though it may seem like you’re using a credit card, the CIBC Visa Debit uses the Plus network to access the funds from your chequing account.

CIBC is a good option for Canadian travellers who feel more comfortable using their debit card in the same fashion as their credit card, without having to pay interest or bills once they return. However, additional fees may come with each transaction.

<strong>More information about the Bank of Montreal</strong>

Bank of Montreal works with Cirrus Network, which offers millions of ATMs across the world that are compatible with Mastercard. BMO customers can access over 2 million ATMs using their BMO Debit Mastercard, however, use may lead to additional fees and surcharges.

<strong>More infomation about the Royal Bank of Canada</strong>

Royal Bank of Canada (RBC) also offers its customers compatibility while travelling abroad through the Visa Plus Network, meaning customers can use their RBC debit card at the point of purchase, with a fee per transaction. Money can also be withdrawn at any ATM with a Visa Plus Network symbol.

Like the majority of Canadian banks, TD Canada Trust offers its customers access to most automated tellers across the world that are a part of the Plus or Visa Network.

While rates have changed since this infographic was initially published in March of last year, rates remain relatively similar to the time of their original posting. 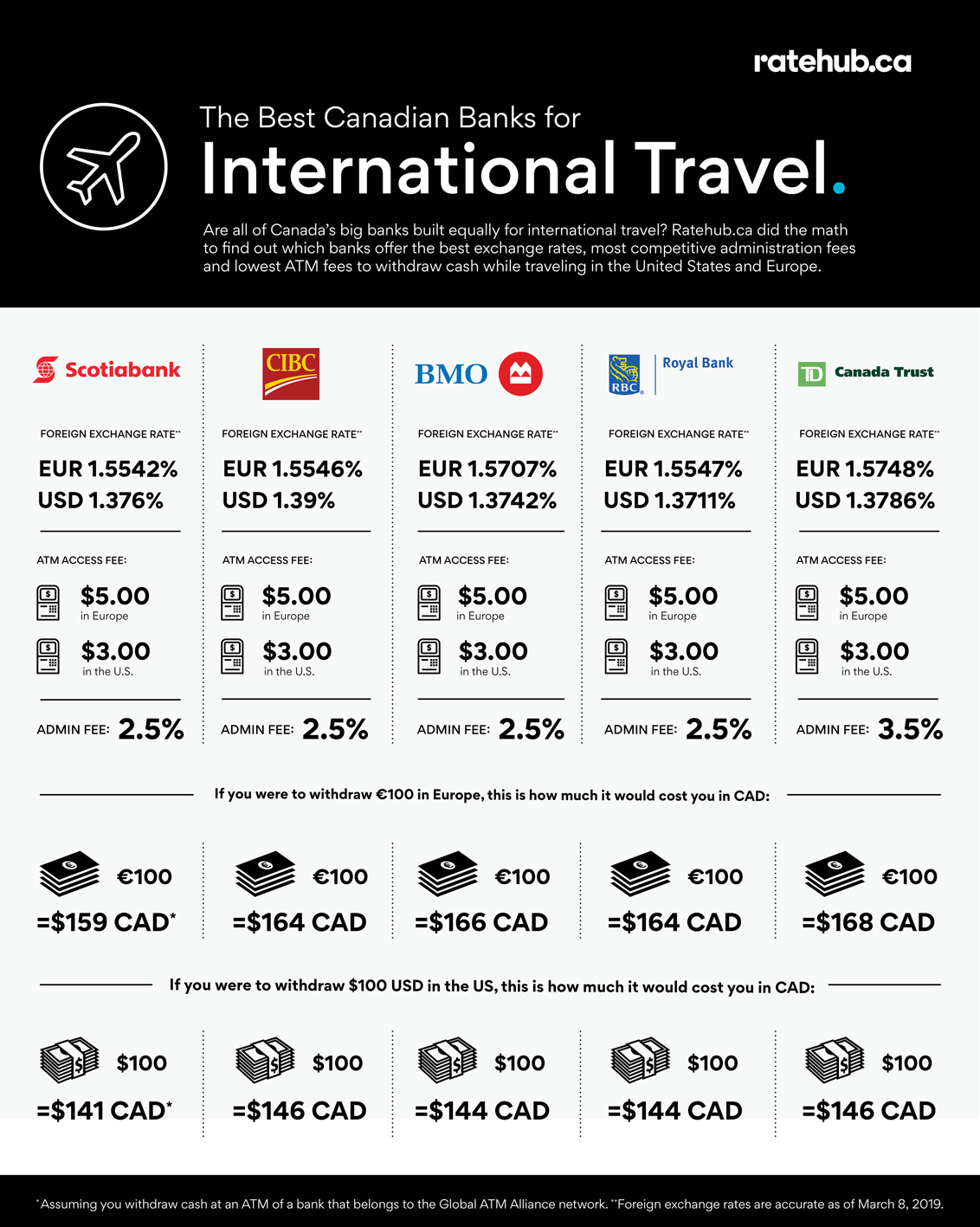