Bank of Canada Maintains its Overnight Rate at 1.75% 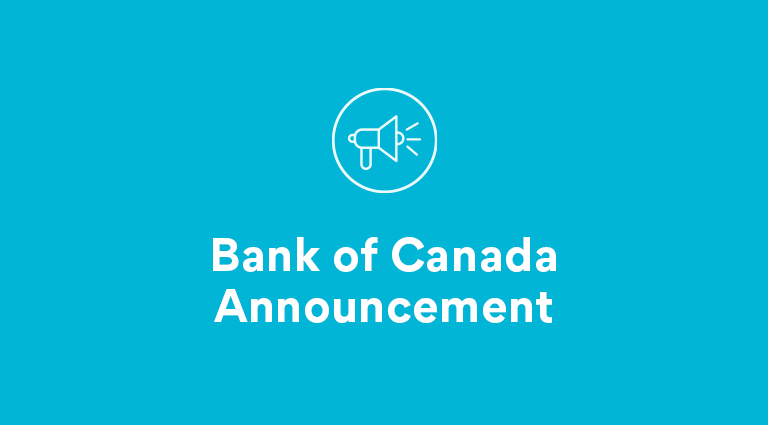 The Bank of Canada has maintained its target for the overnight rate at 1.75%, it announced Wednesday.

Global economic concerns remain a key concern to the Bank of Canada, with ongoing uncertainty around trade conflicts causing economic slowdown across various countries. Growth in Canada has also been a concern; the Bank now expects slower growth than it had anticipated in January.

“As expected, the Bank of Canada has left its key overnight rate unchanged at 1.75%,” James Laird, president of CanWise Financial, said. “In its announcement, the Bank cited both global and domestic concerns to justify its moderate stance. In Canada, the Bank remains concerned with the energy sector, and a weaker than expected housing market.”

However, the Bank expects both global and economic activity to improve in 2019.

“Consumption will be underpinned by strong growth in employment income,” the Bank of Canada said in its announcement. “Outside of the oil and gas sector, investment will be supported by high rates of capacity utilization and exports will expand with strengthening global demand.”

Language suggesting a near future rate hike – which had been a staple in previous policy announcements – was removed in this latest one.

“Going forward, Canadians can expect the Bank of Canada to maintain its current policy, until both domestic and global concerns diminish,” Laird said. “This means that late 2019 or early 2020 is the earliest it will consider a rate hike.”

“Anyone with a variable rate mortgage should be pleased with this announcement because it diminishes the timing and likelihood of any increase to the prime rate,” Laird said. “This announcement also provides some pressure relief to those considering entering the housing market, as they should expect fixed rates to remain stable through the spring and summer home buying season.”

categories: Mortgages
tags: Bank of Canada Bank of Canada overnight rate mortgage rates
How many credit cards should I have? 5 Personal Finance Rules to Live By