The History of GIC Rates

There are definitely reasons to buy GICs: they provide security of capital and also generate some income. However, with interest rates as low as they are, the unavoidable truth is that GIC returns right now are far from exceptional. One-year GICs pay approximately 1%, and you’re doing well if you find a 5-year GIC rate above 2%. (We have much better GIC rates on our site, but these are the averages overall.)

It wasn’t always the case, though. Historically, GICs often offered a much greater return to investors than they do today. Before we take a look at the data, it’s important to distinguish between two types of returns: real and nominal.

By contrast, the real return takes into account the effect of changes in a broad basket of consumer prices. Usually, this is inflation, but deflation can also occur. Inflation means that each dollar has less purchasing power, whereas with deflation, the purchasing power of a dollar increases. Imagine that you have $100 and prices for everything in the economy rise by 5%. Now your $100 doesn’t buy as much.

Similarly, if you’re receiving 1% annually on an investment, but inflation is running at 2% per year, the net result is that the purchasing power of your money is actually declining by 1% a year. So even though your money is growing in nominal terms, in real or inflation-adjusted terms, it’s actually falling. We tend to focus on nominal returns, but it’s the real return that truly matters.

There’s a very simple formula for calculating the real return of an investment, such as a GIC:

In the case of consumer price deflation (which admittedly is rare), note that you are subtracting a negative number, which actually adds to your real return. So let’s say you’re earning 1% on a GIC and the consumer price index (a measure of inflation) falls by 2% in a year. We then subtract (-2%) from 1% for a real return of 3%.

Now let’s see how GIC rates have fared historically. First, we pulled data from the Bank of Canada website, to show the nominal returns for 1, 3 and 5-year GICs going back to 2005. The average nominal returns over the past 10 years have been between 1.40-2.28%. If we compare that to the average consumer price index, which was 1.81% from 2005-2014, the average real return investors saw on these products over the past 10 years was*:

*Remember that every year looks different, but these are the averages over the past 10 years.

A more long-term view is provided by the following chart published by London Life in 2011. (Look at the “5-year GIC return” column + the “consumer price index” column.) 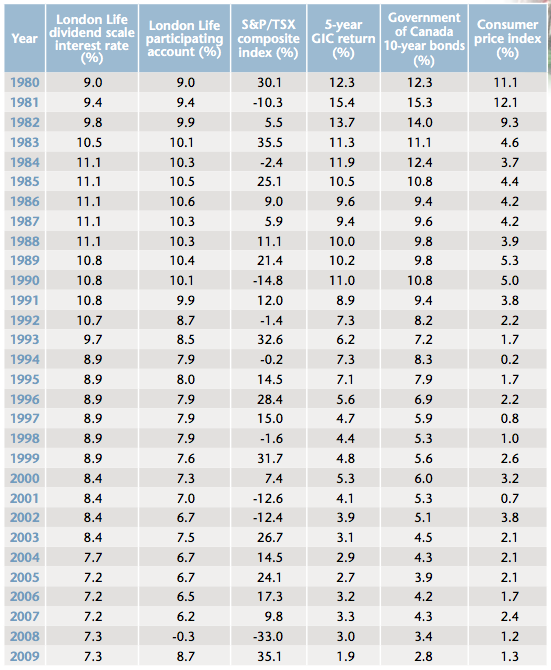 Tomorrow, we’ll explain why GIC rates are so low these days, and where they might be headed in coming years.