[Infographic] The Brooklyn Effect: Why Hamilton is Appreciating Like Crazy

Hamilton, like all other areas within driving distance of Toronto,  has seen its property values swell with the rising tide that is the Greater Golden Horseshoe housing market.

But Hamilton, in particular, seems to be on fire.

Hamilton had a tighter housing market than the 416

Detached houses in every postal code in Hamilton, save one tiny portion in the northwest, appreciated in in 2017. Compare that to 2014, when detached houses in five areas were depreciating.

Last spring at the market’s peak Hamilton actually had a tighter market than Toronto. Hamilton saw average property gains of 30 per cent to Toronto’s 28 per cent, in March 2017 from March 2016 according to RAHB and TREB.

Why are so many Torontonians moving to Hamilton?

So what’s going on?

We only have to turn our gaze south, to the story of how Brooklyn became cooler than Manhattan, and then almost as expensive, and then how everyone had to move on to Queens, to see what’s happening right here.

Like Brooklyn, Hamilton’s appeal largely lies in the fact that it’s in commuting distance to a major urban centre, while still being urban itself.

In other words:  die-hard urbanites  who recoil at the thought of identical, developer-built houses, having to drive to get brunch and low population diversity, but who, at the same time, have found themselves either pursuing a creative career not commensurate with high wages, or with children who require more space than they can afford in the city they love so much.

They must find somewhere palatable to live.

Hamilton, with its Victorian-era housing stock going for about a million less than it would in Toronto, thriving local arts scene and blue-collar roots happens to fit all the criteria.

So the urbanites move. The first wave is reluctant. They pine for their homeland. So, like all exiles, (and they do feel like exiles; priced-out by their supposed enemies — rich foreign buyers and big developers) they start reshaping their landscape to the familiar.

That usually involves nourishing themselves with the food that reminds them of home. So they open mini-taco-tapas-Korean-fusion restaurants. Then they start diversifying the modes of transportation. They spearhead bike-share programs and petition the city to install bike lanes.  And how to stay awake for those GO train commutes? Certainly not by driving to a chain coffee shop, sin of sins. No. Instead they build their own coffee shops (fair-trade, shade-grown, locally roasted beans, espresso-based drinks only, no-tap) on each corner.

Until it starts to look way better

At a certain point, the urbanite-diaspora reaches a critical mass. They’ve built the infrastructure to support their community. That’s when the second-wave starts paying attention. All those die-hard urbanites still living in the big city start questioning things. Like, why am I paying $1,800 a month in rent for a basement apartment with no washer-dryer, when that could be my mortgage for a month in this also-great-but-smaller-city-a-mere-one-hour-commute-away. I could get a backyard for what I’m paying to live within walking distance to work. Maybe they have jobs there too!

And look: they even have a mini-taco-tapas-Korean-fusion restaurant!

And everyone else realizes it’s better and ruins it

Then, of course, all the groundwork is laid and the third wave comes to capitalize on it all: investors and developers.

And here we are.

When a home for sale in Hamilton averages, $550,00 at last count, doubling in a decade.

It’s not a new story, but rather the same old story. The story of the rise of Brooklyn, and of the larger tale of gentrification, happening in cities all over the world.

The only real question, therefore, is, what comes after Hamilton? Where’s our Queens? 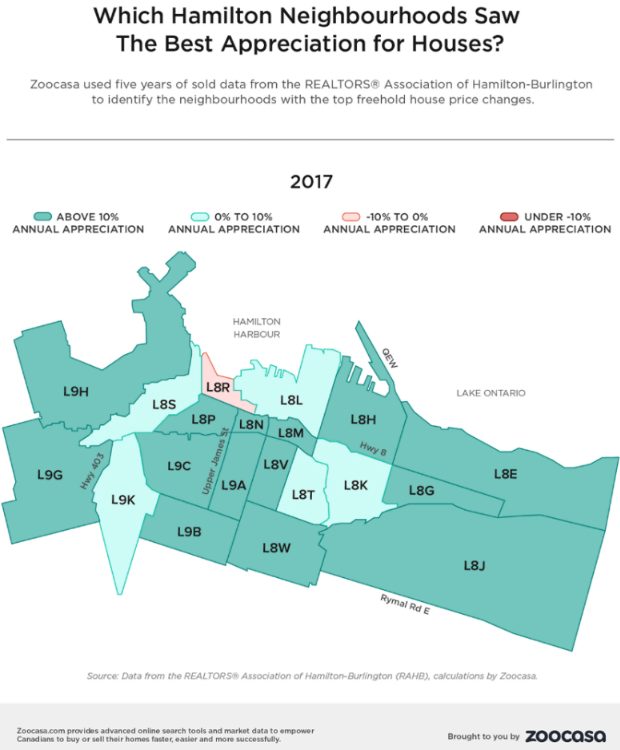 Zoocasa.com is a leading real estate resource that combines online search tools and a full-service brokerage to empower Canadians to buy or sell their homes faster, easier and more successfully. Home buyers can browse condos for sale in Toronto, townhouses and houses for sale.

Photo by Ales Krivec on Unsplash