Canadians love their credit cards – a recent study by Payments Canada found that Canada has become a global leader in credit card use, with total transaction volume exceeding more than $462 billion in 2016.

We conducted a survey of 1,400 self-reported Canadians between December 2017 and February 2018 to learn more about what Canadians value in credit cards. We found that although Canadians love rewards and cash back, most Canadians are leaving a ton of money on the table.

Specifically, 86% of Canadians surveyed state rewards or cash back is one of the most important factors in choosing a new credit card, yet 42% said they never search or compare credit cards to see if they have the best card on the market. Furthermore, 29% of respondents indicated that they have had their primary card for over 10 years, while another 22% have had their primary card for 6-10 years.

Notably, the top-ranked rewards credit cards are typically less than 3 years old, meaning that although people value rewards, if they are not comparing cards and are holding onto cards for more than 3 years, it is very likely they are not getting the best rewards. Lastly, our survey found that 50% of respondents said they’d never pay an annual fee, even though credit cards with annual fees often offer the most generous rewards. In fact, all of the best rewards credit cards in Canada come with annual fees, though many are waived for the first year.

How much are Canadians missing out on? In short, almost $1,000! We did the math using one of the best rewards credit cards currently in the market, the Scotiabank Gold American Express. 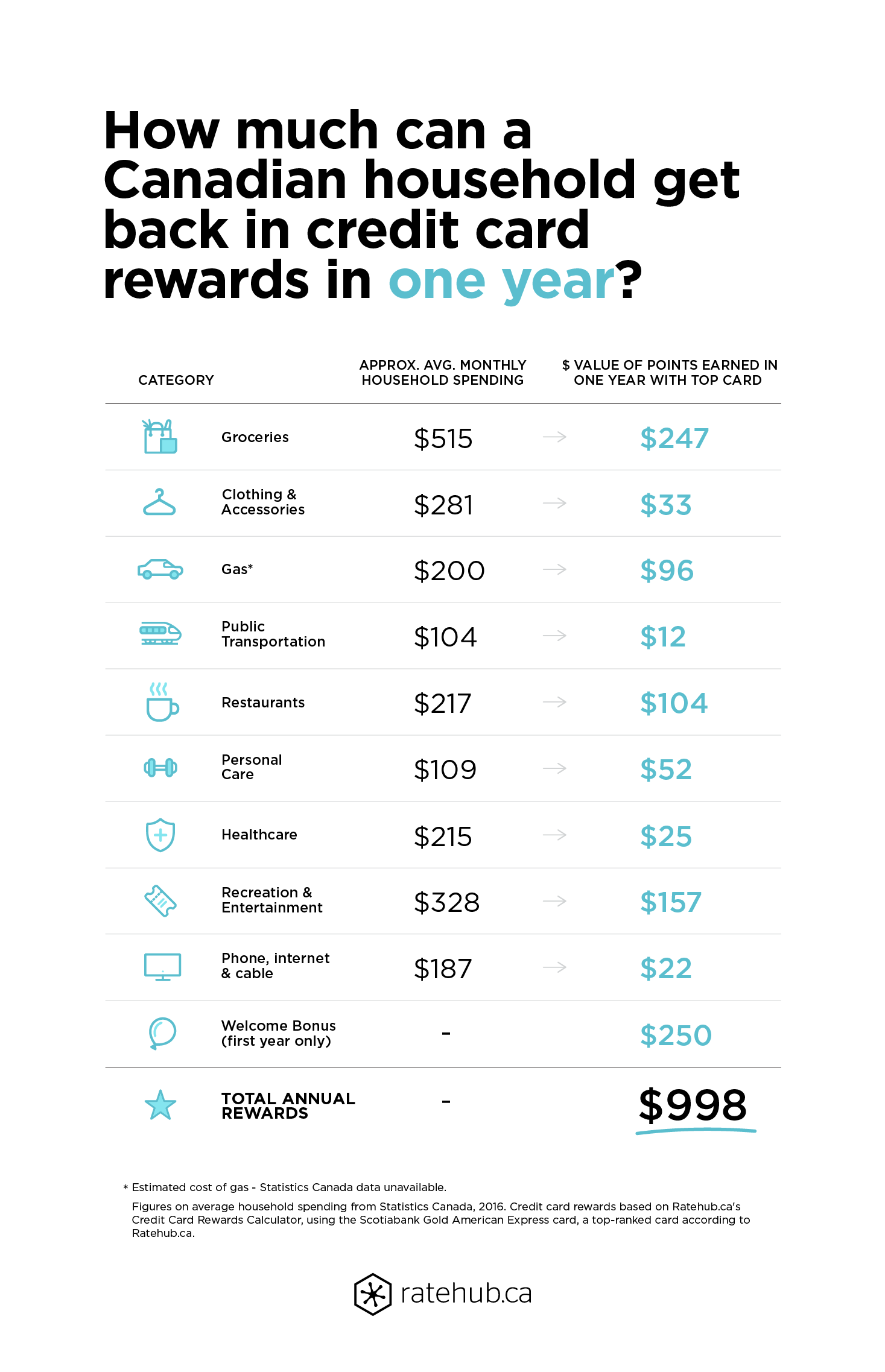 Are you one of the 42% that have never compared credit cards? Or maybe part of the 51% that have had their primary credit card for over 6 years? There is no time like the present to take a look at some the best credit cards in Canada and find yourself a new card that will earn you some serious rewards.

We chose the Scotiabank Gold American Express card to use as our comparison card when doing the calculations for this survey because it offers one of Canada’s highest earning rates, giving you four Scotia Rewards points for every dollar spent on gas, groceries, entertainment, and restaurants – that’s 4% back in rewards – and one point per dollar on all other purchases. Scotia Rewards can be redeemed for travel (flights, hotels, car rentals, cruises, vacation packages), gift cards, and merchandise from retailers such as Apple and Best Buy.

This card’s travel rewards program is truly flexible: points can be used to cover all taxes, fees, and surcharges. There are no blackout dates, and you can travel on any carrier. You can book your trip yourself or use Scotia’s full-service travel agency and have the option of paying for your trip with points upfront or charging the cost to your card and redeeming points to cover it later. The card also offers a 30% discount on a Priority Pass membership ($32USD fee also applies per visit), complimentary concierge services, extensive travel insurance, and access to American Express Invites.

The best family credit cards in Canada for 2022

11 Hidden Credit Card Fees You Should Know About