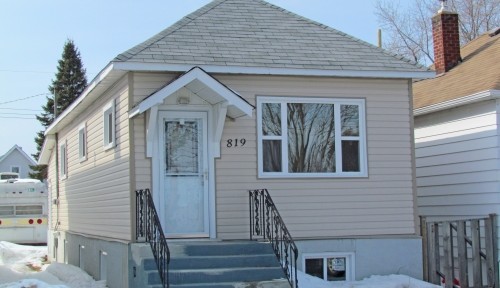 This two-bedroom, one-bathroom bungalow in Thunder Bay features modern upgrades and an unfinished basement, making it perfect for a young professional or couple to get into the market with.

So far in our starter homes series, we have featured what a first-time buyer is looking at paying for property in B.C.’s Lower Mainland, Alberta, Saskatchewan and Manitoba. Moving East, our next stop is Ontario. However, Northern and Southern Ontario paint two slightly different pictures – and Toronto is an entity of its own. For that reason, we will be splitting the province into three posts. First, let’s look at Northern Ontario.

In Northern Ontario’s largest city, Sudbury, the average selling price of a home is $245,000. Fortunately for first-time homebuyers, many can get into a starter home for significantly less.

“You can find detached bungalows with up to 1,100 square feet for less than the average selling price,” said Marcel Gladu, a realtor in Sudbury. “For that [smaller] price, however, you may need to do some basic cosmetics.”

While small home renovations are to be expected of most starter homes, what is not is the lack of inventory to choose from in the first place.

“Listings are down about 13% from last year,” explained Gladu. “Because there is not a lot of selection right now, buyers are having to act fast.”

With so many first-time buyers in Sudbury right now – namely young couples who want to take advantage of low mortgage rates – it’s not uncommon for some properties to see bidding wars and then sell for more than the asking price. And the same picture is being painted in Thunder Bay.

“Our market has sky-rocketed in probably the past six years,” explained Becky Forester, a realtor in Thunder Bay. “The average selling price used to be $125,000 and now it’s over $200,000.”

With a lack of inventory, Thunder Bay is definitely a seller’s market, Forester advised.

“A two-bedroom house, with anywhere from 700-900 sq. ft. They won’t normally have a garage but, if you get one, it’s usually a more dated house that has no updates. If you get a similar home with no garage, you may get a new kitchen, new flooring, etc. So it all depends on what’s important to the buyer.”

To give you a better idea of starter home prices in Northern Ontario’s two largest cities, we pieced together this chart using real homes listed on MLS.

As noted by both Forester and Gladu, the mix of low Ontario mortgage rates and low asking prices often results in a number of quick sales.

“A starter home will usually sell within a couple weeks,” Forester confirmed. “It’ll spend a week on the market, before an offer is accepted. Then give it another week for conditions to be met and it’s gone within two.”

If you’re looking at buying in Sudbury this year, talk to an Ontario mortgage broker soon and keep your eyes on sites like MLS.ca. What Gladu is seeing now is that, despite inventory being low, a number of sellers are simply waiting until we’re further into spring before listing their homes. And if you’re already close to purchasing a home you should begin comparing Ontario home inspectors and Ontario real estate lawyers.