Spring/Summer is the Best Time to Get a Mortgage, According to Ratehub Data

Spring is the season of change for many; cleaning out closets, starting fresh, and preparing for the warm summer months ahead. For many, spring brings with it the opportunity to get a new home. And, according to recent data compiled by Ratehub.ca, this season may be the best one to get a mortgage.

We took a look back at historical data for the best five-year fixed and variable rates since the beginning of 2016 (see the chart below). We discovered that, while rates obviously fluctuated quite significantly over the course of the last three years, there was a noticeable drop in the best mortgage rates during a three-month period from April to July each year.

This is because, similar to Spring clothing sales, mortgage lenders choose this season as one to offer their own sales.

“Lenders and mortgage providers come out with their strongest promotions during the busy spring and summer home-buying season,” James Laird, president of CanWise Financial, said. “Regardless of the interest rate environment, springtime is when lenders are willing to make the smallest margins in order to win business.” 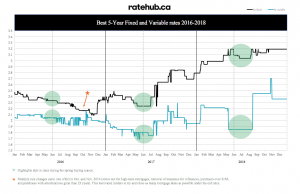 During this period, many lenders will choose at least one rate and term to price aggressively in order to attract attention to all of their mortgage products, Laird explained.

“Lenders also come out with special promotion offers to incentivize borrowers to lock in a rate. Consumers can expect to see cash-back deals to help with closing costs and refinance fees,” he said. “Some lenders offer extra-long rate holds during this period, for example: BMO is currently offering a 130-day rate hold. The ‘30-day quick close rate’ is another promotion many lenders opt for – this is a discounted rate that applies if your mortgage is closing in the next 30-45 days.”

According to Ratehub data, the average best five-year fixed rate available between January and March 2016 was 2.39%; the average variable rate was 2.09%. Over the course of April to July, those averages dropped to 2.33% and 2.04%, respectively.

A year later, in 2018, proved that while a rising rate environment can override the benefits any Spring mortgage deals, mortgage holders still benefited from certain promos. The average best five-year fixed rate increased from 2.94% from January to March to 3.07% in the spring and summer, but the average best variable rate fell from 2.17% to 1.96%. And, as the chart above illustrates, lenders actually slashed fixed rates over the course of the spring/summer buying period.

Lenders have reasons for getting competitive on their pricing in the spring, according to Laird.

“It’s crucial that lenders remain competitive through the spring market, and they do so in order to hit their annual mortgage volume targets,” Laird said. “In most cases, lenders will hit their targets during Q2 (April to June) and, as a result, tend to be less competitive with promotions during the latter half of the year.”

However, that isn’t the only time of year homebuyers can expect to find deals.

“Consumers will typically see rates fall again in October in the lead up to October 31. All of Canada’s major domestic private banks end their fiscal year on October 31,” Laird said. “Lenders who want to get an early start on their targets for the next year will come out with their promotions during this time period.

“If you have flexibility as to when you get a new mortgage, pay attention during the spring because it is the time of year when the mortgage marketplace is the most competitive.”

Photo by BRUNO CERVERA on Unsplash