How Autonomous Vehicles Will Affect Your Car Insurance

Ready or not, self-driving cars have arrived. They are changing the way we think, we move and understand our place in an increasingly interconnected world. Tech giants like Tesla, Waymo (Google subsidiary), Uber, and Lyft have already staked their corner of the self-driving tech market. Right now, automated cars are road ready, but they are only being tested in closed communities under direct supervision in states such as California, Pennsylvania, and Arizona.  According to the Insurance Information Institute, by 2025 there will be 3.5 million vehicles on US roads by 2025, increasing to 4.5 million by 2030. Self-driving cars will disrupt and revolutionize vehicle insurance markets and may bring an increase in safety and decrease in road accidents. What does this mean for you and your car insurance?

The rise of the Self-Driving Car

The “self-driving” car is here, but it might not mean what you think – “fully automated” cars are still a while away let’s looks at how we got here and what autonomous even means. Automotive experts developed a classification system for defining automation for motor vehicles. The Society of Automotive Engineers (SAE) international standard for autonomous vehicles is arranged through six levels of classification: 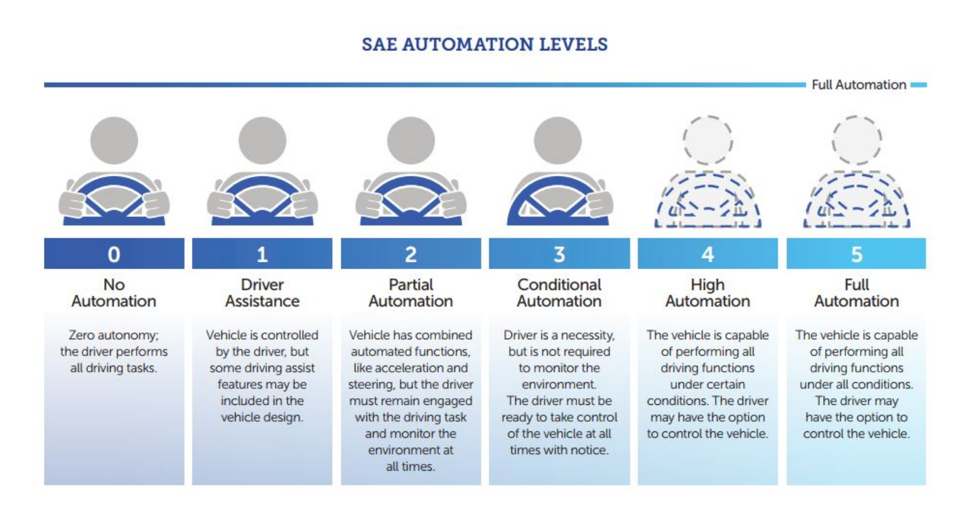 Today, most vehicles with enhanced automation come with partial automation (level 2). The Association of British Insurers (ABI) have forecasted that by 2021, drivers will be “free to undertake non-driving tasks with the vehicle fully in charge in defined motorway circumstances” (level 3). By 2025, we enter the high automation era with optional control (level 4, 5).

Experts across the board have varied in their opinion on when the consumer changeover to self-driving cars will occur with most suggesting by 2030 every car on the road will have some level of automation beyond current capabilities.  Considering that 94% of car crashes are caused by some form of driver error, autonomous vehicles (both partial and fully automated) are not only expected to revolutionize the way in which you experience travel but more importantly – significantly increase passenger safety.

With a predicted reduction of up to 90% in traffic-related fatalities – or 29,447 lives a year, automated vehicles are estimated to save up to $190 billion a year in health-care costs. It’s clear that the most significant advantage of autonomous cars is increased in safety and fewer accidents. With the decrease in risks across the board, what does this mean for the vehicle insurance industry? More importantly: how does this impact your next decision when comparing car insurance quotes?

Automation and liability – who is liable?

While insurance providers are still gauging the industry standard to figure out what the market value is for liability, the big question is just who will be liable in the event of a crash or accident?

On the legal side, experts have suggested that liability in accidents involving autonomous vehicles – when in fully automated mode – should be placed back on the vehicle manufacturer and gradually shift to the “driver” according to the degree of automation.

What about autonomous liability in 2019?

Your next car is more than likely to be equipped with partial or conditional automation – the space in between “assisted” and “automated.”

The area between “assisted” and “automated” is still murky for insurance and legal experts. Wired.com has reported on what they call “autonomous ambiguity” and liability determination in the unfortunate event of a crash suggesting that manufacturers need to clearly communicate just what they mean by “autonomous” or “self-driving.” Moreover, autonomous ambiguity has provoked the Association of British Insurers to release a report on alerting consumers about the risk of increasing automation and the possible increase in accidents as we transition to full-automation suggesting that some drivers might over-estimate the automated capabilities of their vehicles.

The grey area between “assisted” and “automated” is a concern for insurance experts calling on policymakers and regulators in the automotive sector to inform consumers about the limits of current technology in emerging “self-driving” cars. While the advent of the fully driverless car is near – it is still at least a decade away. The immediate concern for you is informing yourself about how automation will impact your current auto insurance quotes.

When looking for the best car insurance for your next or first automated vehicle, you should do your research and scan the market for insurance companies that factor in automation in their risk assessment. Currently, the average consumer comparing auto insurance quotes are typically weighed on several factors:

Once self-driving cars eventually become the vehicle industry standard, you can expect automation levels to be included as a determining factor in premium pricing to reflect the level of automation. There is a possibility we’ll see the traditional risk factors such as age and driving history disappear altogether.

Some have suggested that emerging auto manufacturers such as Tesla’s plan to offer a single price for car maintenance and insurance might eliminate the need to compare car insurance premiums all together by disrupting the industry.

For now, investing in a car with more automation features, especially ones like brake mitigation or lane assist that make driving safer will put you ahead of the curve with getting the best car insurance pricing while we wait for what happens next.