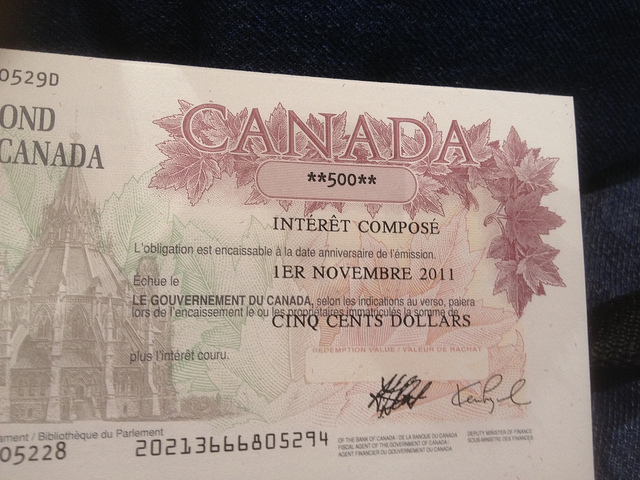 Canada Savings Bonds (CSBs) have been around since 1946. But they may not be around for much longer.

Last week, CBC News reported that “Finance Minister Bill Morneau is seriously considering an end to the Canada Savings Bond program in his next federal budget.”

According to the story, he has a copy of a KPMG report—commissioned by the Harper government—that says the CSB program is no longer economical and should be cancelled. It recommends “an orderly phasing out of the program.”

Given that it costs nearly $60 million to run the program annually, it’s understandable the federal government is thinking of doing away CSBs. Morneau, for his part, has denied an official decision has been made on the issue.

Sales of CSBs have been in freefall in recent years. And The Globe and Mail’s Rob Carrick says CSB assets plummeted to $6 billion last year from $55 billion in 1987. One reason for this is that it’s much easier for the average investor to buy similar products (GICs, for example) that provide a greater return.

The current annual interest rate on CSBs is a paltry 0.5%. This year, CSBs (and their sister product, Canada Premium Bonds) are only on sale between Oct. 3 and Nov. 1. They can be cashed year-round, but the brief selling window makes them less than convenient for prospective buyers.

How Canadians will be affected

Assuming the federal savings bond program is cancelled, it’s reasonable to assume it won’t disappear completely. In other words, the government will still honour the terms of the outstanding bonds, even if it decides against future sales.

For Canadians who have become used to buying savings bonds, they’ll have to decide what to do if the program’s scrapped. These investors should give some thought as to why they bought savings bonds in the first place.

If a person purchased a savings bond because they don’t like risky investments, they’ll likely want to take what used to be invested in the product and find a very similar offering. These could include GICs (be sure to look for the best GIC rates), high-interest savings accounts, or provincial savings bonds.

Note, however, that interest rates on the provincial variety tend to be pretty low. If you shop around, a GIC or high-interest savings account will provide a much greater return (at least, in the current low-rate environment) without any additional risk. (As usual, a caution that deposit investments are not completely risk-free. A burst of inflation over a short period of time is the principal risk to these products.)

Like CSBs, GICs and savings accounts are almost always backed by the government (subject to deposit insurance limits), so the risk profile is the same.