It turns out it’s really expensive to buy that new iPhone outright and you won’t find a good landlord who doesn’t demand a one-year term. But there has been a trend in GICs in favour of shorter terms.

For those of you who are new to GICs, they’re an easy way to save money for a guaranteed rate of return, with a catch: Your money’s locked in for a specified term. GICs are sold in terms anywhere from 30 days to five years, and sometimes longer. Historically, as you commit to a longer term, you’ve been rewarded with a higher interest rate. A two-year GIC will pay more interest than a one-year GIC, and so on.

Recently however, that’s changed. Right now if you compare the best GIC rates on Ratehub.ca, you’ll notice the best-in-market GIC rates are the same for two-, three-, four-, and five-year GICs—all 2.75%. The trend has been attributed to uncertainty among banks as to what will happen with the economy. Unsure whether they’ll be able to re-invest their customers’ GIC money profitably a few years down the road, banks are discouraging people from locking in their money for more than two years.

The one-year GIC term is still the most popular among our users, but has fallen from a peak of 52% of all clicks in April, down to just 38% in June. 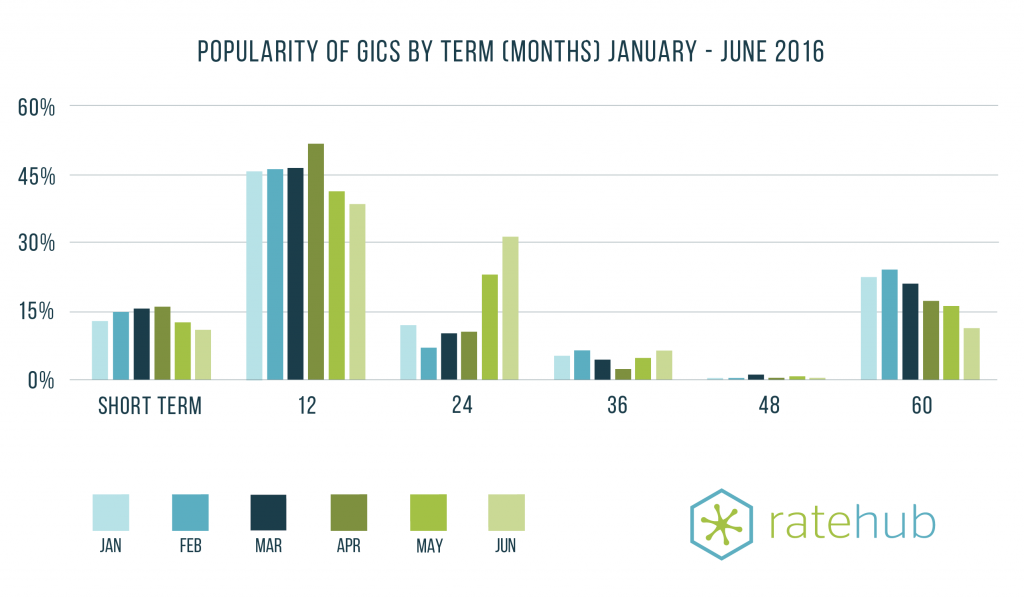 So what should you do now that you’re armed with this new knowledge?

Experts are warning us to settle in for a sustained low-interest rate environment, which is good news for your mortgage but not great for your low-risk investments. The benefit of GICs is they take the uncertainty out of investing. You know what the return will be for sure, and regardless of what happens in the market, you know your money will be secure.

The rates quoted in this article are accurate as of Jun. 28, 2016 but GIC rates change frequently. Use our comparison tool to see the best GIC rates in Canada as of right now.