Should You Put a Market-Linked GIC in Your RRSP?

It’s RRSP season and banks in Canada are promoting products related to these accounts. One such product is the market-linked GIC. So, is now a good time to buy one of these products?

Before we answer that question, let’s first recap how market-linked GICs (which are sometimes called equity-linked GICs) work and how they differ from typical GICs. With a standard GIC, the bank promises you a fixed rate of return—expressed as an annual percentage—on your investment. Terms vary from anywhere as short as 30 days to in some cases more than five years. You can choose between redeemable GICs, where you can access your money at any time, or non-redeemable GICs where funds are more or less locked in for the term you select.

With an market-linked GIC, your initial investment (like with a standard GIC) is still guaranteed. In other words, if you invest $10,000, you’ll receive at least this amount at the end of the term (usually three or five years). You may even be guaranteed a nominal return. In the case of RBC, it’s advertised a market-linked GIC that returns a minimum of 1.00% over three years, which works out to about 0.33% per year.

But overwhelmingly, and as their name implies, the potential for returns with market-linked GICs are dependent on the performance of the stock market. A particular market-linked GIC may be tied to the S&P/TSX Composite Index, or a specific sector such as financials, which encompasses bank and insurance stocks.

It’s easy to understand the allure of market-linked GICs. As hybrid products, they seem to combine the safety of GICs with the greater potential of the stock market. Put another way, the pitch boils down to, “You won’t lose money but you can make more than a standard GIC.”

If all goes well, meaning the stocks tied to an market-linked GIC go up, an investor will do well. It’s possible to make a return of 5% a year or more with one of these products.

Alas, investors should be aware of the drawbacks buried in the fine print. The devil is in the details, as the saying goes.

The most obvious risk with market-linked GICs is that the stock market either stays flat or declines over the term of the product. Should this happen, an investor will only get back their initial investment plus any guaranteed nominal return. This is bad news for two reasons. First, there’s a significant opportunity cost because had the money simply been placed in a standard GIC, a decent amount of interest might have accrued. Second, due to the effect of inflation on purchasing power, an investor who just receives their initial principal at the end of the term is really losing money because $10,000 today will be worth less than $10,000 three years from now.

It’s also worth mentioning some of the other drawbacks with market-linked GICs. For one thing, banks that issue these products cap the returns an investor can receive. This can take the form of either a maximum annual return, such as 8% per year, or a participation rate should the stock market rise. For example, a financial institution may say that your return will be only 60% of the growth of the S&P/TSX over five years. What this means is that you won’t fully enjoy the benefits should the market go up.

Finally, there are tax and dividend considerations to keep in mind. With regards to taxation, any returns will be taxed as interest income by the Canada Revenue Agency, which is done at a less favourable rate than capital gains income. And forget about being paid dividends. Even though dividends can form an integral part of your returns on stocks over the long term, they’re excluded from the return calculations with market-linked GICs. Both of these factors, taxation and dividends, make the case for you owning stocks directly if you’d like exposure to this asset class.

All this said, there is a time when market-linked GICs aren’t the worst deal. That time is when the stock market, by various measures, is very low. If you buy one of these products when stocks have already been crushed, the odds are pretty good that they will bounce back before your GIC’s term expires. Or as the aphorism goes, buy low, sell high.

Unfortunately, stocks still look pretty pricey, even with the rocky start to 2016. As the chart below from the American investment website Advisor Perspectives shows, the value of stocks relative to the size of the economy remains quite high. Canadian stocks are affected by what happens south of the border so this is quite relevant. In the past (in 2000 and 2007 especially), when this indicator was in similar territory, returns over the next few years were decidedly sub-par. (For what it’s worth, it’s called the Buffett Indicator because it’s reputed to be famed investor Warren Buffett’s go-to measure of market valuation.) 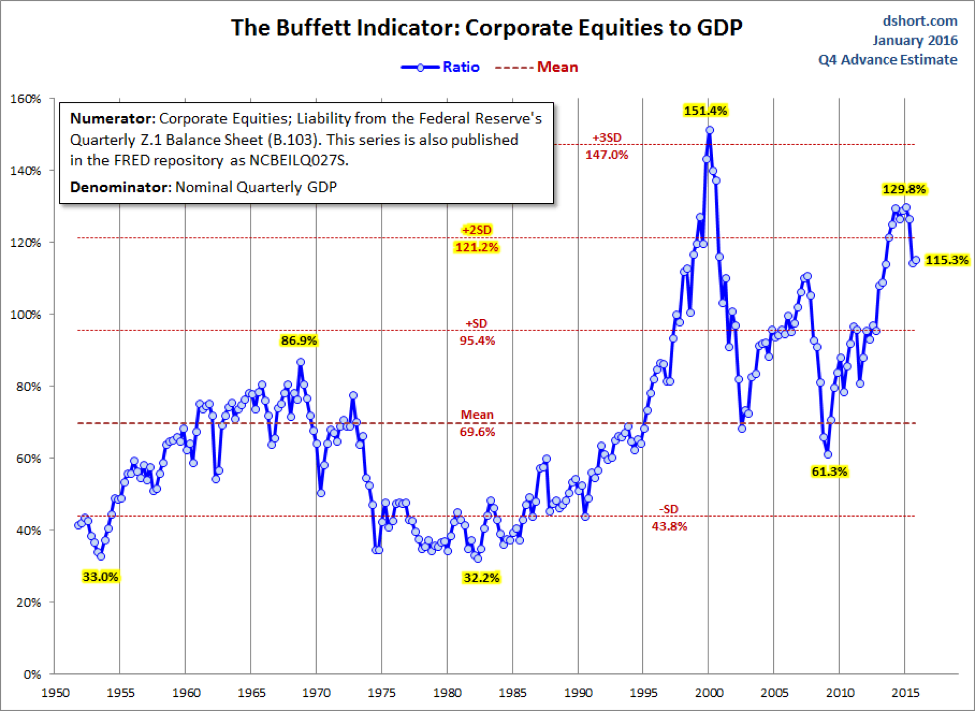 This RRSP season, the banks are promoting market-linked GICs, which seem to offer the best of both worlds. Just keep in mind that there’s a wide gulf between the return you could get in theory, and the return, or lack thereof, you may end up receiving. If something sounds too good to be true, it often is.