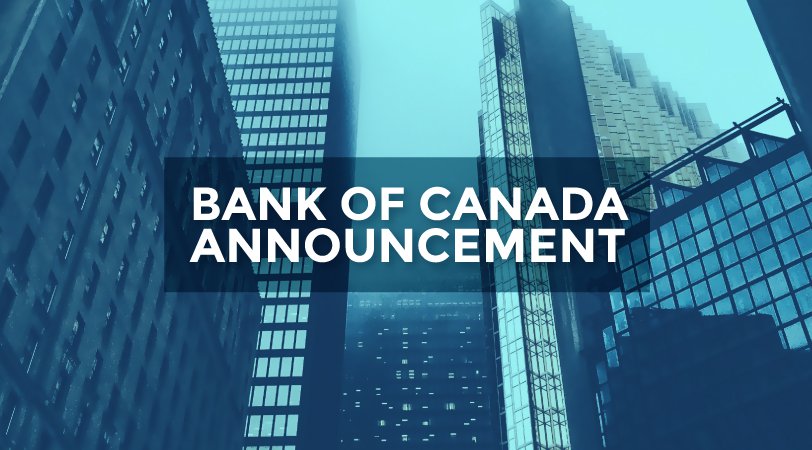 The Bank of Canada announced Wednesday it is maintaining its target for the overnight rate at 1¾%, while also softening its stance on future rate increases.

“In this morning’s interest rate announcement, the Bank of Canada softened its stance on future rate increases. Canada’s labour market remains strong, inflation rates remain below target; however the Bank has cited concerns with consumer confidence, business investment, and household spending in energy-producing provinces,” James Laird, president of CanWise Financial, said. “The Bank is keeping a close eye on the slowdown in Canada’s housing market, to ensure it doesn’t become more pronounced in the future.”

The Bank presented a mixed-bag of economic data as its reasoning for maintaining the rate.

While labour remains strong, the Bank is projecting temporary economic slowdown due to challenges in the energy sector and weak exports.

“For Canada, the Bank was projecting a temporary slowdown in late 2018 and early 2019, mainly because of last year’s drop in oil prices,” the Bank of Canada said in a release. “The Bank had forecast weak exports and investment in the energy sector and a decline in household spending in oil-producing provinces.

“However, the slowdown in the fourth quarter was sharper and more broadly based. Consumer spending and the housing market were soft, despite strong growth in employment and labour income,” it continued. “Both exports and business investment also fell short of expectations. After growing at a pace of 1.8 per cent in 2018, it now appears that the economy will be weaker in the first half of 2019 than the Bank projected in January.”

This latest announcement does, however, bode well for aspiring homebuyers, according to Laird.

“The softening rate outlook will put downward pressure on bond yields, causing fixed rates to drop as we enter the spring homebuying market,” Laird said. “Variable rate holders should be pleased, as any increase to prime rate will be further in the future than the Bank has signaled in prior rate announcements. Overall this announcement will be helpful to first-time homebuyers looking to enter the housing market this spring.”