It’s big news nearly two years in the making: Air Canada has finally unveiled the details of their brand-new Aeroplan loyalty program in an announcement we’ve been anticipating since August 21, 2018 when the national carrier acquired the popular loyalty program for a cool $450 million.

The new Aeroplan program is officially set to launch November of this year, and will introduce a slew of changes to how you can earn and redeem points (that’s right, they’re now officially points, not miles).

Here’s an overview of some key facts:

Many of the changes introduced as part of Air Canada’s new Aeroplan program are positive. Particularly the elimination of surcharge fees, the ability to maximize your rewards by adding a stopover on each one-way flight for an incremental 5,000 points (outside of Canada/US), and the fact you can book flights without seat limitations – which is a departure from Aeroplan’s current Fixed Mileage Rewards policy that limits your options to a fixed number of seats per plane.

The elimination of surcharge fees alone can add up to hundreds in savings on flights booked on Air Canada using points. Plus, with the new stopover policy, you can add multiple stops and extend your trip for an incremental 5,000 points per stopover, which is solid value and something that’s sure to be taken advantage of by savvy Aeroplan members and world travellers.

In terms of drawbacks, there are a few. Namely, the additional $39 fee you’ll owe on flights booked outside of Air Canada on any of the other two dozen Star Alliance partner airlines. There’s also the fact that stopovers can’t be booked within Canada or the US. Additionally, if you’re looking for a simple and super straightforward travel rewards program, Aeroplan still isn’t it. That said, the program will offer great value, particularly for frequent flyers and points optimizers.

A preliminary glance at Aeroplan’s new redemption chart also indicates there are some marginal increases in the number of points required to book flights (specifically to the Pacific and Atlantic Travel Zones, however, there are some bright spots for travel within North America). That may sound like a major negative but calculating redemptions values are more nuanced and when considering the elimination of costly surcharge fees, you could actually come out ahead with the new program even if some flights theoretically cost more points. It’s worth noting these are just early assumptions and we’ll be doing a deeper dive into points values in the very near future.

If you’re wondering how many points you need to book a flight, Aeroplan has released a Points Predictor Tool. Additionally, here’s an example of how the new redemption chart works:

Let’s say you want to book an Air Canada flight from Toronto to Vancouver. Since you’re travelling within the North America Travel Zone and the distance between those two destinations is roughly 2,600 miles, you’d need approximately 12,500 – 17,500 points to book an economy seat for a one-way flight. The specific number of points you’ll need (whether it’s 12,500, 17,500, or anywhere between that range) will depend on factors such as whether you’re travelling during peak season, taking a particularly popular (or less popular) route, and if you’re carrying a co-branded Aeroplan credit card.

You may have noticed that unlike Air Canada, Partner airlines require a fixed number of points instead of a range. However, booking with a Partner airline will cost an extra $39 booking fee per person and you can only choose from a restricted number of seats per plane that have been designated for Aeroplan members (you won’t have the same restriction on Air Canada and can use points to book virtually any seat on any flight from the airline). 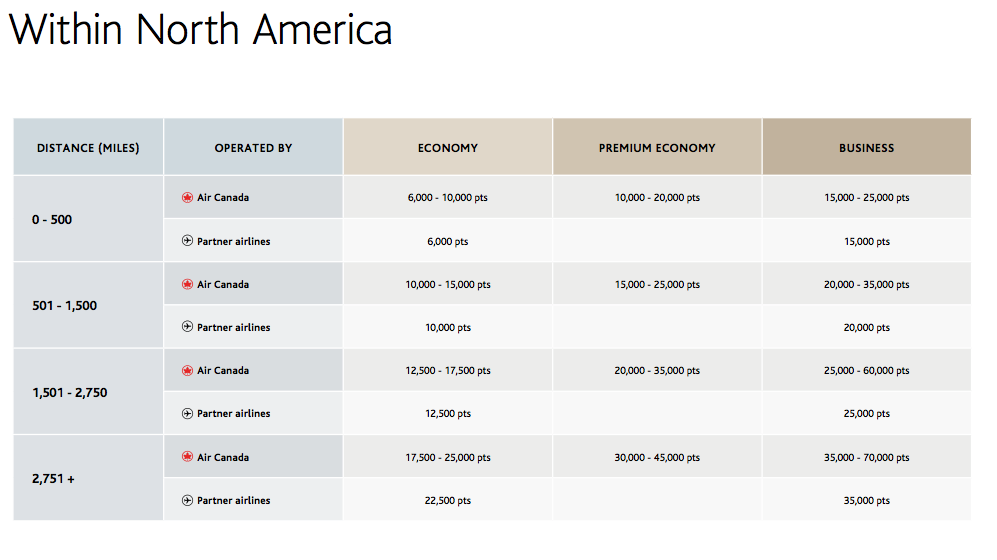 What to look for when getting a business credit card