What is interim occupancy?

When your pre-construction condo is on its final leg of completion and the condo developer has given you the go-ahead to move in (even handing you the keys), it’s only natural to assume that you’ve now become the legal owner of the unit.

But, as anyone who’s bought a pre-construction residence before is aware, that’s not the case.

Rather than becoming a condo owner right away, when buying pre-construction, you first enter a period called interim occupancy.

Interim occupancy isn’t the same as final closing when ownership is transferred to the buyer.

So what are the differences between interim occupancy and final closing and why is a part of the pre-construction purchase process? We breakdown the facts below: 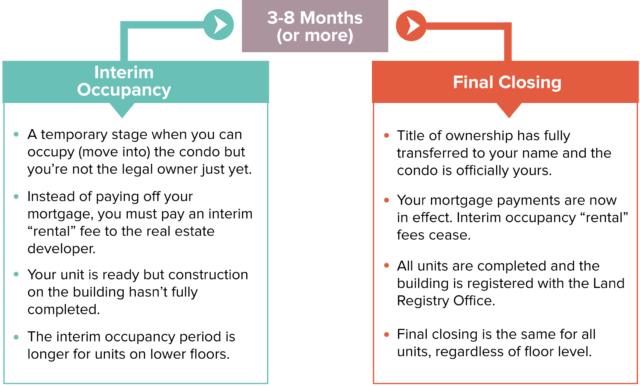 Aptly named, interim occupancy is a temporary phase in the pre-construction buying process that comes just before final closing (the last step in a real estate transaction when ownership is transferred to the buyer).

During interim occupancy, your apartment unit is regarded as being livable and you can move in. However, the rest of the condo tower isn’t fully completed and other units (as well as some commons spaces, such as hallways) are still being finished off.

Since construction on the building in its entirety isn’t done, the condo isn’t registered with your local municipality, and therefore, the rights of ownership can’t legally be transferred to your name.

That means the real estate developer still owns your unit and your mortgage payments don’t start.

While you won’t have to make mortgage payments during interim occupancy, you will have to pay a fee to the developer on a monthly basis until you eventually take ownership.

Once the entire condo building is completed and officially registered with the Land Registry Office, you’ll exit the interim occupancy period and enter final closing.

In this stage, the title of ownership fully transfers to your name and your mortgage payments will start to kick in. Meanwhile, the occupancy fees you were paying will stop.

If you plan on leasing during interim occupancy, you also can’t apply for the HST rebate as a principal resident and you’ll have to do so as an investor instead. This can complicate the process of receiving your HST rebate as you’ll have to pay taxes on your new condo upfront and wait to receive the rebate upwards of two months after final closing (read more about how the HST rebate works for investors versus end users).