The Top 10 Most Expensive Condo Buildings in Mississauga

Condos are on fire in the Greater Toronto Area this year.

It’s quite a change of scenery from the beginning of 2017, in which it seemed like even the most rundown detached house drew a bidding war, and demand for single-family homes was so high that prices were climbing 35 per cent year-over-year.  Detached housing prices peaked in April 2017 when they were selling for over $1.2 million in the GTA, (and almost $1.6 million in the 416), according to the Toronto Real Estate Board.

That all changed when, in the same month, the Ontario government stepped in with its Fair Housing Plan which included 16 measures designed to cool the market and OSFI, the bank regulator, announced its plan to tighten mortgage lending rules starting January 1 of this year. By the end of 2017, a feeling of mass uncertainty spread; sellers listed en masse, causing a flood of inventory, while buyers acted more cautiously.

By April 2018 the results of government intervention were in: sales had plunged between 22 to 38 per cent for all market segments and prices for detached, semi-detached and townhouses had all fallen.

Condos, unlike every other market segment, were selling for more than they had the year before, climbing 3.2 per cent to $559,343.

Since condos are the least expensive market segment, this figure represents the least a buyer could expect to pay to get a foothold in the market.  For many, it’s still too much.

Toronto condos within city limits are around $600,000 — a price, that in many parts of Canada would afford you a 4 bedroom house, a pool and heated bathroom floors.

It’s no wonder then that so many buyers are choosing to head to Mississauga, a city with its own bustling economy that borders the west end of Toronto, to seek more affordable condo options.

But buildings in Mississauga are increasing in price at different rates.

Zoocasa was interested in identifying which buildings have most appreciated, so they analyzed sales in over 100 developments in the city where at least five transactions had taken place. After averaging the square foot based on TREB sold data for 2018 for the year to date, Zoocasa identified the 10 most expensive condo buildings. The majority of buildings over six cluster just south of Highway 403 and north of Central Parkway West. The top three buildings sell for over $600 per square foot, a bargain compared to the top 10 best appreciating condos in the  City of Toronto, which reach over $900 per square foot.

Check out the infographic below to see exactly which buildings made the list: 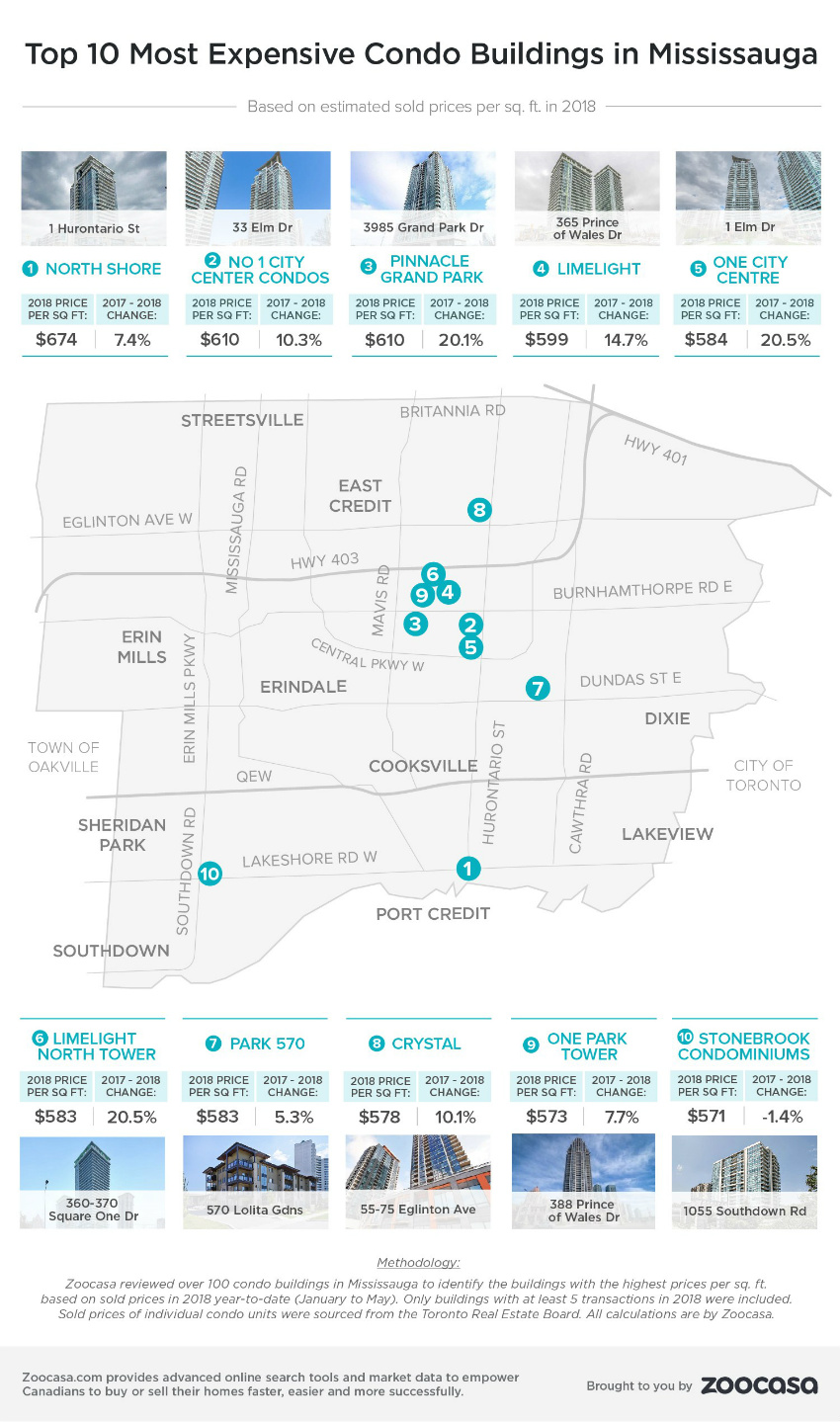 Photo by Grovemade on Unsplash