The Most Expensive Home: Ontario

We have an innate fascination with extremes:  the tallest, the biggest, the smallest, the fastest, etc.  In the world of mortgages and real estate, when properties are pushed to big dollar signs, you can always expect it to draw attention.  In this Ratehub.ca series, we’ll detail the most expensive home in each province for you to fawn over.

The Four Seasons Toronto penthouse sold for a Canadian record $28 million earlier this year. Purchased by an international buyer, the 9,038 square foot condo works out to an astonishing $3000 per square foot – placing it among the footage costs of New York and London.

Using the lowest 5-year fixed Ontario mortgage rate of 3.49% at 25 years amortization we conclude that the affordability of this penthouse is as follows:

What’s even more incredible is the Toronto first-time home buyer tax credit which amounts to a measly $5,725. Great discount, huh?  The interest due at the end of the term is a staggering $4.4 million, enough to buy a “regular” penthouse in Toronto.

Besides the Four Seasons, the most expensive free standing property in the Ontario housing market, according to MLS®, can be found in Toronto’s affluent neighbourhood, the Bridle Path, otherwise known as “Millionaires Row”.

The living space is more than 40,000 square feet, spread across two buildings: the “live-in building” and the “sports complex”.  The estate sits on four acres with every amenity – indoor tennis court, cinema, bowling alley, indoor pool and putting green.  Let’s not forget the soaring 46-foot arboretum, which could fit another average-sized home in it.

Property taxes alone are $115,341**. Using the Ratehub.ca mortgage calculator for Ontario, you would “save” $17,448 on the mortgage payments compared to the Four Seasons penthouse.  What a deal! 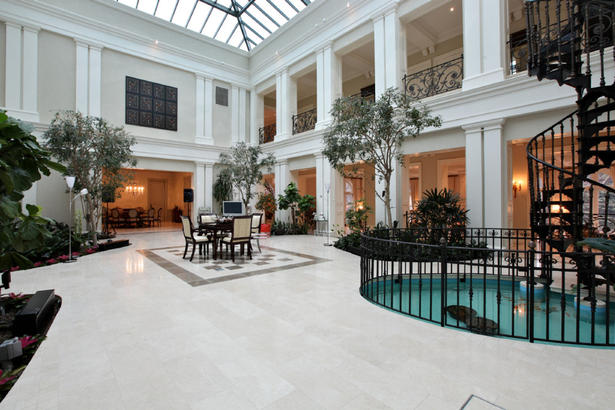 Is this a hotel? Nope, just my foyer.