Taking Stock of the Equity Markets: Is There Bubble Trouble?

When J.P. Morgan (the person) was asked what the stock market would do, he famously replied: “It will fluctuate.” I don’t have a crystal ball, but in what follows I will attempt to be somewhat more decisive.

Over the long-term, the stock market does tend to rise. Economic activity increases and so do corporate profits. In this regard, being perpetually negative on stocks is highly unlikely to be a winning proposition.

That said, it’s not always a great time to have a high exposure to equities. Take the late 1990s, for example. Relative to history, the US stock market became more expensive than it ever had. The market subsequently crashed, falling well over 40%. Similarly, someone who purchased a TSX index fund just before the financial crisis probably wishes they had waited a year or two, as the market plummeted nearly 50%.

So is now a good time to be heavily-weighted towards equities? My gut says no. I think now is a time for caution.

For one thing, equity markets in North America have risen substantially since the depths of the financial crisis. A rising market isn’t a problem in and of itself, but by some well-known valuation measures, stocks are very pricey. For example, the total value of US stocks relative to Gross Domestic Product (reputed to be investor Warren Buffett’s preferred measure of market value) is well into bubble territory. This doesn’t mean a crash is necessarily imminent, but it does suggest the market is significantly overvalued. The last two times this ratio exceeded 100%—the late 1990s and 2005-2007— crashes happened within a couple years. 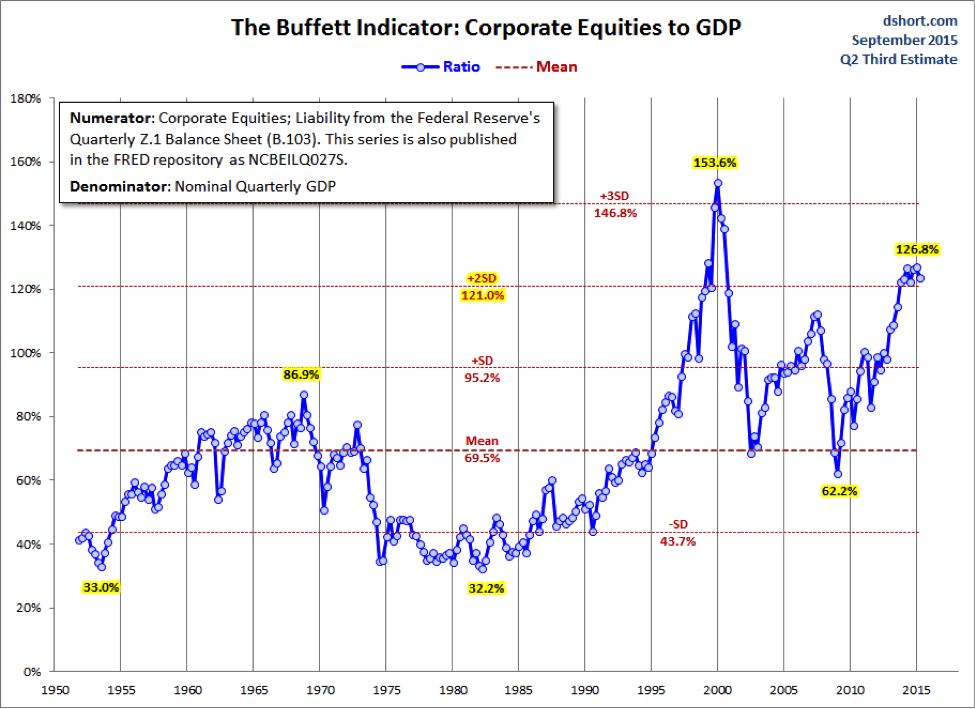 Of course, this is the US stock market, but what about Canadian equities? Our benchmark equity market, the TSX, has two broad things working against it at the moment. First, when the US tumbles, we don’t escape unscathed. As the following chart shows, the TSX fell both in 2000–2002 and sharply during the 2008 financial crisis. 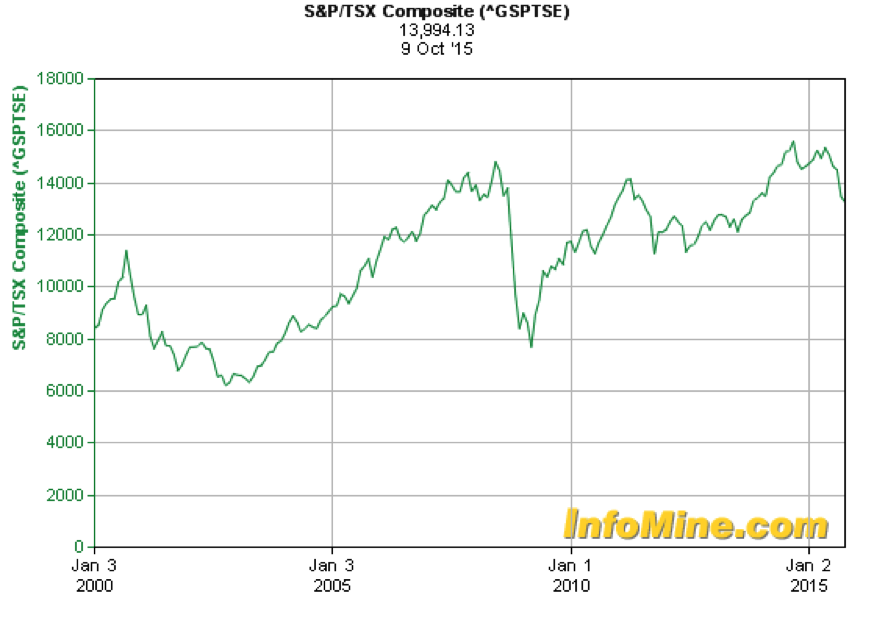 But there’s one other issue with the Canadian market, and it’s something all investors should be aware of: its lack of meaningful diversification. As this breakdown from S&P Dow Jones Indices shows, financial companies plus commodity businesses represent nearly 65% of the value of the TSX. Further, much of the 4.9% health care component is actually one company, Valeant Pharmaceuticals. 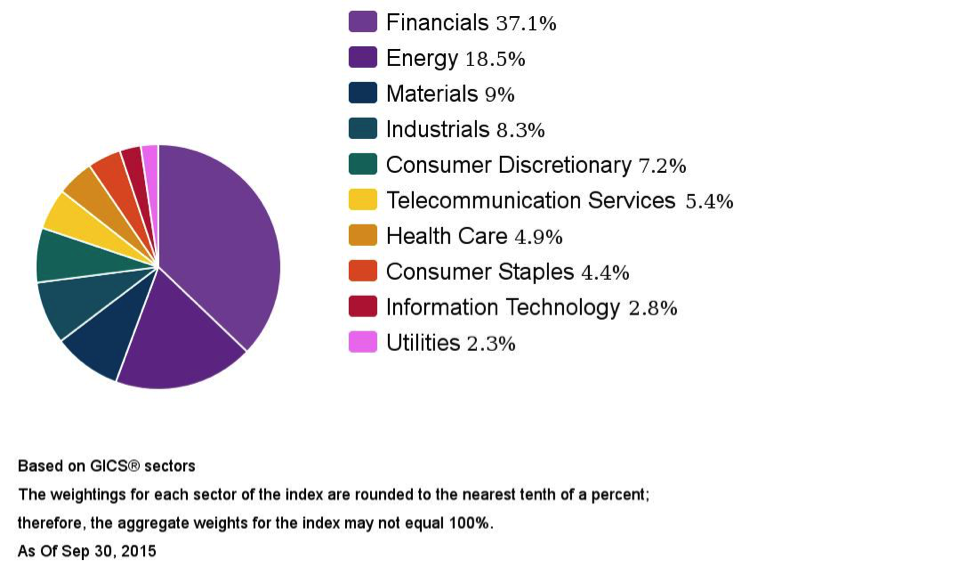 Investors are wisely told to maintain adequate diversification. As such, the Canadian market presents a serious problem. In theory, owning an index fund tracking the TSX should offer broad exposure to a wide variety of stocks. Yet in reality, so much of the value is concentrated in financials (meaning banks and insurance companies), resources (like energy and mining), and one outsized pharmaceutical firm.

Granted, the TSX has managed to thrive in recent years despite its strong concentration in a few sectors. Resource prices boomed, helping commodity stocks. House prices and household credit growth have been strong, which has provided a tailwind for banks. And to cap it off, Valeant has rocketed along with many biotechnology stocks.

The lack of diversification now threatens the TSX. For one thing, commodity prices have crashed. This has affected the stocks of energy and mining companies. Part of the commodity crash is due to a slowdown in China, which is a huge consumer of raw materials, and part is due to the rapid oil production growth in the US.

I would also argue that many speculators who bought commodities during the bubble have been forced to sell, depressing prices even more. While it won’t be a straight line down (and indeed we’re currently seeing a bounce in resource share prices), I still think the outlook is bearish going out a few years.

Biotech, for its part, has been in a huge bubble, during which the price of Valeant’s stock has skyrocketed, soaring from under $50 in 2012 to a peak of $350 earlier this year before falling precipitously to $225 where it currently sits.

Finally, we have the banks. Whatever your opinion about the Canadian housing market, it’s tough to argue that consumers can continue to rack up ever-increasing amounts of debt. This is particularly the case in areas such as Alberta that have been hit hard by the oil rout. And of course, should the housing market suffer a crash, it’s difficult to see the banks escaping unscathed given the highly indebted nature of Canadian households.

As I said at the outset, over the long-term, the stock market does tend to rise. But there are some worrying signs at the moment that should make investors give serious thought about over-committing themselves to North American equities. Nothing, mind you, is certain. Except for J.P. Morgan’s truism that stock prices will fluctuate.

Banks vs. credit unions in Canada: what’s the difference?