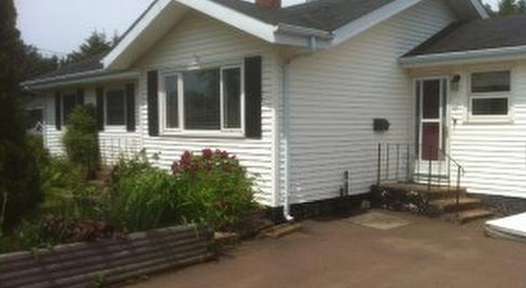 This three-bedroom, one-bathroom home in Charlottetown features an eat-in kitchen and a large backyard and is priced at $155,000 – just below the average starter home price that first-time buyers face in Prince Edward Island.

Purchasing a home is one of life’s biggest milestones – it’s also the largest bundled transaction you’ll make. Finding the right home is never easy, and most first-time buyers’ budgets will require them to make sacrifices and prioritize the features they want most.

Our starter home series has taken us across the country – from British Columbia to New Brunswick. This week, we’re looking at what first-time homebuyers can afford in the two largest cities on Prince Edward Island (PEI): Charlottetown and Summerside.

With a population of just 35,000, Charlottetown is the capital of PEI. Named after Charlotte of Mecklenburg-Strelitz – the wife of King George III – and the Birthplace of Confederation, Charlottetown is full of Canadian history. And you may or may not be surprised to read that it’s incredibly affordable to live in a city that is home to so many historical sites.

“For that price, first-time buyers can generally get a 2- or 3-bedroom bungalow that is 20-50 years old,” Vos explained.

While most buyers can find these homes in nice neighbourhoods within the city, Vos says the one contrast to most major Canadian cities is that condos in Charlottetown are often more expensive than detached starter homes and are generally targeted towards the Baby Boomer generation.

So what is the average profile of a first-time homebuyer in Charlottetown? Vos says, “many are either single professionals or young married couples, aged 22-28 years old”.

While the same can be said to describe first-time homebuyers in PEI’s second-largest city, the average starter home price in Summerside is nearly $30,000 less at just $130,000.

For that price, “first-time buyers can get a 2- to 3-bedroom bungalow in the city,” said Summerside Realtor Amanda Kember.

If not within the city, a home located in the suburbs just outside of Summerside only adds 15 minutes to a homeowners’ commute.

To give you a better idea of what type of house you can afford in these two cities, we’ve created a chart that compares real starter home listings from both cities.

On top of affordable housing prices, Kember added that one additional bonus for first-time buyers in either city is that they are eligible for a full refund of the PEI land transfer tax on any home purchased for less than $200,000.

If you’re thinking of buying a home in either Charlottetown or Summerside, you should talk to a PEI mortgage broker today. Interest rates are rising but are still low, making it a good time to obtain a mortgage and get into the real estate market.

categories: Mortgages
tags: starter home
Notable News of the Week: August 16, 2013 What Can a Dental Hygienist Afford to Buy in Québec?