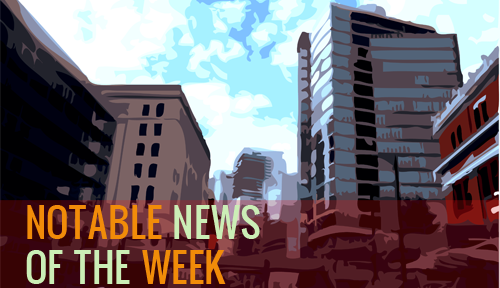 A collection of stories that made headlines this week relating to the Canadian mortgage and housing industry.

Mortgage affordability is better than five years ago – The Edmonton Sun

The maximum amortization length for high-ratio mortgages has been reduced three times in the past four years, from a 40 year maximum in 2008 down, to the 25 year max we have today. Shorter amortization periods have higher monthly payment amounts, so you might reason that affordability is worse now. However, mortgage payments are actually more affordable than they were five years ago when the maximum amortization period was 40 years because mortgage rates today are hovering at all-time lows. For example, looking at the Canadian mortgage rate history, we find the lowest discounted 5-year fixed rate in 2007 was as high as 5.79 per cent, compared to the same rate today which could be had for 2.99 per cent. So, if we amortize a $300,000 mortgage over 25 years at 2.99 per cent, the monthly payments will work out to $1,433 versus a $300,000 mortgage amortized over 40 years at 5.79 per cent which works out to $1,592. A savings of $159 per month!

“The market is poised for a slowdown, there’s no question about that…but it’s going to be gradual, not disorderly.” – Robin Wiebe, economist for the Conference Board of Canada

According to a news report by the Conference Board of Canada, low mortgage interest rates, immigration and downsizing baby boomers will save the Toronto condo market from “bottoming out.” The effects of the new mortgage rules and modest economic growth will likely cause only a 1.2 per cent drop in condo sales this year. Overall, condo sales and prices will not drop off entirely because of their affordability; particularly compared to single-family homes in Toronto which are becoming increasingly more expensive, now averaging more than $508,000 in July.

After three consecutive quarters of decline, household borrowing (in the form of mortgages, consumer credit and loans) accelerated in the second quarter (Q2) for a total of $93 billion. However, mortgage borrowing did slow in Q2 as housing market activity subsided; unfortunately, overall household debt acceleration was amplified by consumer credit demand.

The results of the provincial elections in Quebec had some worried that a Parti Quebecois (PQ) win would impact real estate prices in the province. Many believe that a PQ government will push for separation, causing a mass exodus of Anglophones in Quebec causing property values to plummet.

Others weren’t quite as convinced.

MCAP became one of the first lenders to reduce the maximum loan-to-value (LTV) on HELOC mortgage products from 80 per cent, down to the OFSI recommended 65 per cent. The new mortgage underwriting guidelines will require lenders to limit new HELOCs to 65 per cent LTV by the end of their fiscal years.