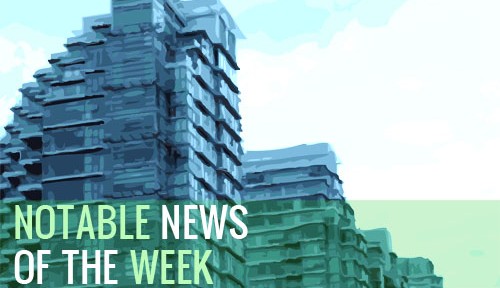 In a report recently written by Benjamin Dachis, a senior policy analyst at C.D. Howe, it is estimated that the Toronto Land Transfer Tax (LTT) has reduced home resales by 16 per cent per year, since 2008 when it was instituted. The Toronto LTT is expected to generate $330 million for the city, this year alone. However, Dachis argues that the tax prevents people from moving in order to take better jobs, and keeps residents in homes that they do not want. Dachis recommends getting rid of the Toronto Land Transfer Tax and raising property taxes across the board, to spread the financial burden.

Statscan has released a revised report concerning Canadian household debt, and the new calculation shows that the debt-to-income ratio in 2011 was 161.7 percent instead of 150.6 percent as previously estimated. The ratio looks at how vulnerable Canadians are should they experience a sudden loss of income or be caught in a housing market downturn. Following the this revision, indebted Canadians now look more at risk than previously thought. Finance Minister Jim Flaherty has repeatedly warned Canadians to be cautious taking on high levels of debt at a time of ultra-low mortgage rates. Flaherty and other policy makers call current household debt levels as the biggest domestic threat to the economy. The main reasons for the revisions were that the new methodology resulted in a higher calculation of household credit market debt and lower disposable income.

Bank of Canada governor Mark Carney has promised Canadians that he will be very clear about any moves the central bank makes to raise interest rates in the future. Carney used the nation’s top domestic vulnerability as an example saying that,

“”If we were to lean against emerging imbalances in household debt, we would clearly declare we are doing so and indicate how long we expect it would take for inflation to return to the two per cent target.”

The Bank of Canada governor acknowledged that uncertainty about the global economy and the intentions of the government were choking the economic recovery by scaring off retail spending and business investment.

Carrick: Why borrowing may force the Bank of Canada’s hand on rates – The Globe and Mail

The Canadian debt-to-income ratio has reached a staggering high of 163.4 percent in the second quarter, as Canadians continue to take on new debt at a faster rate than their incomes are rising. The increase of borrowing has slowed down slightly, but it needs to continue declining to keep the Bank of Canada from raising interest rates ahead of schedule. The Globe and Mail gives three ways to make this happen: