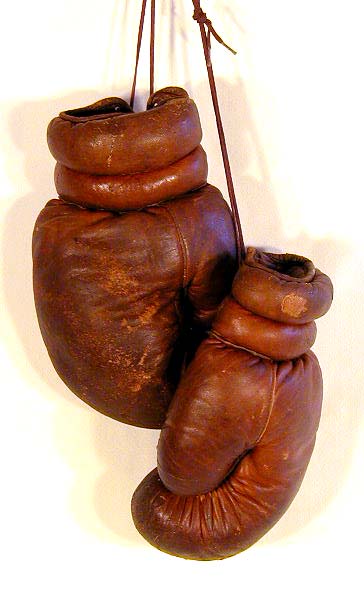 As we move on to the second round of our Mortgage Calculator Battle, we find two of Canada’s banking giants, CIBC and Scotiabank, ready to slug it out.  Both banks have provided excellent mortgage payment calculators thus far.  The winner of this tournament will face the ultimate test – A one-on-one duel with Ratehub.ca’s very own calculator in a superfight to determine Canada’s best mortgage calculator.

CIBC was formed through the largest merger of two chartered banks in Canadian history, when the Canadian Bank of Commerce and the Imperial Bank of Canada amalgamated.  This occurred on June 1, 1961. The company ranks at number 170 on the “Forbes Global 2000 listing”.  In 2010, it was named Canada’s Best Consumer Internet Bank by Global Finance magazine.

The Bank of Nova Scotia, commonly referred to as Scotiabank, is Canada’s third largest bank and was founded in 1832.  It became the first bank to establish itself in Newfoundland, fifty-five years before the dominion joined the Confederation. 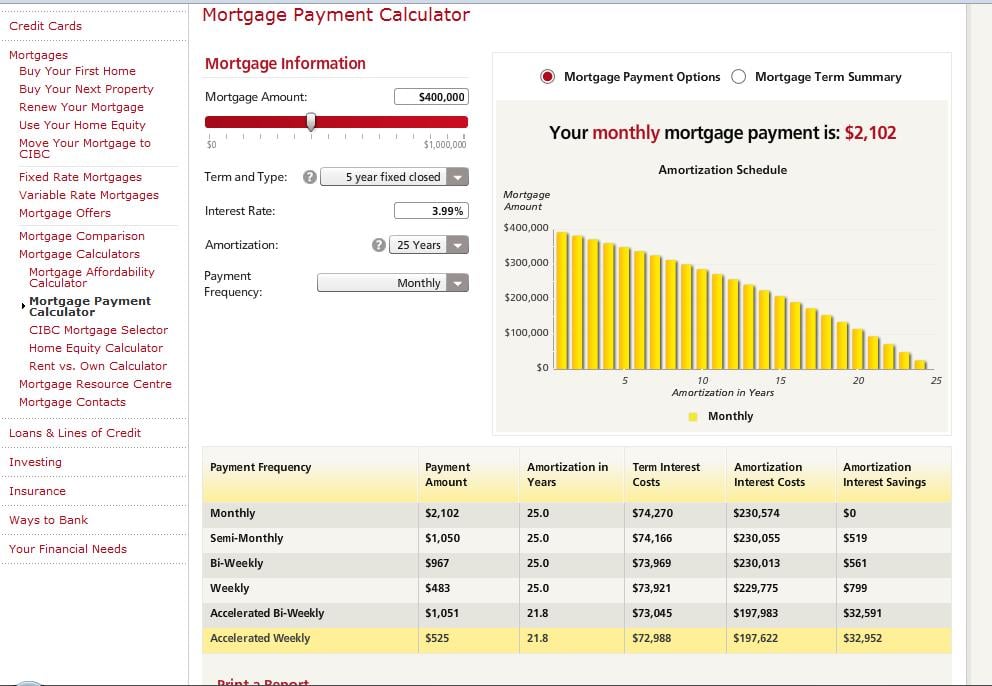 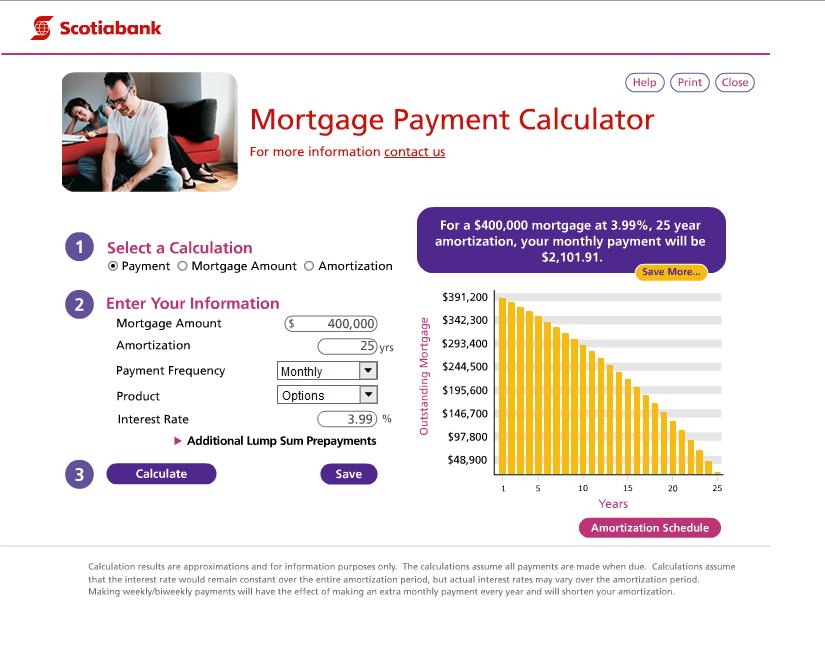 Navigating to the Scotiabank calculator took only three clicks to arrive at, but we felt we wasted a lot of time scanning the webpage to figure out how to get there.  There’s a lot of text on each Scotiabank page which can be confusing.   Once you click on the “Mortgage Payment Calculator”, another window opens and displays a very clean, simple-to-use calculator.  The “calculate”, “save”, and “print” button were all clearly displayed.  What’s interesting is the use of a “Save More” button, when clicked, displays how many years of amortization you can shave off your mortgage by switching from monthly payments to bi-weekly.  There’s also a very handy step-by-step/calculation explanation listed at the top which is very helpful especially for first-time home buyers or those new to mortgage calculators.  Scotiabank also had a full amortization schedule broken down by year.  And “save” button that was unclear as to what it was saving at first, because nothing appeared in our clipboard.  Instead, it saved a cookie in your web browser that loaded the data from your last “calculator session”.

CIBC’s calculator was very easy to locate.  It also took three clicks, but no time was wasted scanning the webpage for keywords.  Once the figures were calculated, CIBC had a very easy-to-read payment frequency chart that displayed the difference in savings derived from the possible payment types.  We also noted that CIBC rounded their numbers to the nearest dollar as opposed to its opponent, which round to the nearest cent. 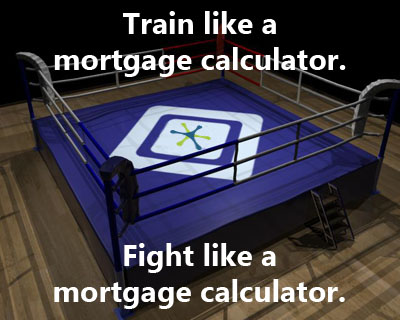 Both calculators loaded the current bank interest rates, once the term was selected, but it also allowed for the user to enter their own data as well, which we found very handy.  Each calculator offered something that the other one didn’t.  From Scotiabank, it was the year-by-year amortization schedule and the quick calculation description.  CIBC, on the other hand, offered a full table of payment type amounts including useful information such as how that payment type affects the amortization and the difference in savings.

It was a really close fight, and we mean, really close.  But slugging it out ‘til the finish, only one calculator shall have its “button” raised….

This battle round goes to the “CIBC” mortgage calculator! 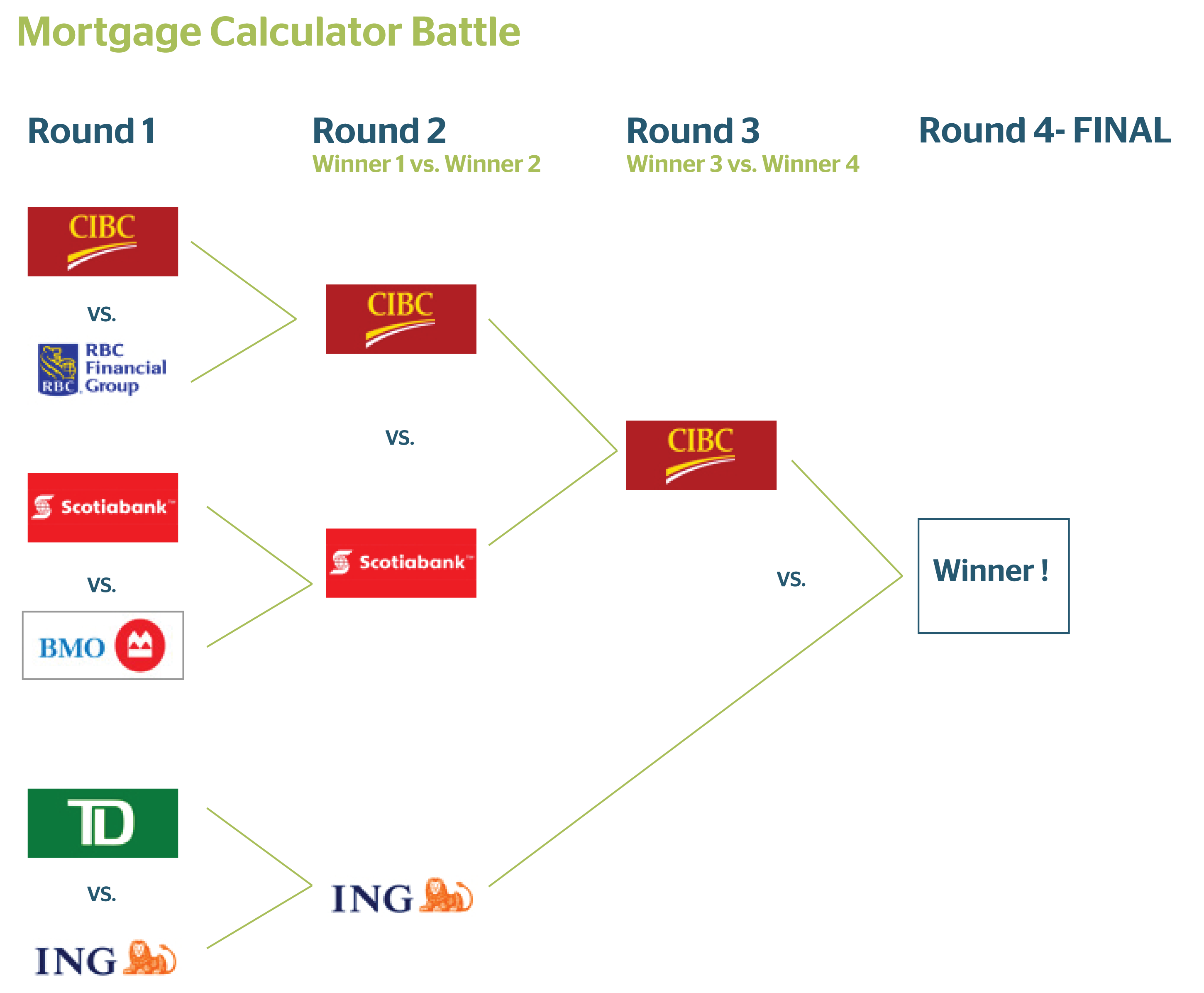 Whether you’re looking for CIBC mortgage rates or Scotiabank mortgage rates, you can find all the best bank interest rates here at Ratehub.ca.