Canada’s housing market is well on the road to recovery after hitting a slump in late 2017 through 2018 due to government intervention and a new mortgage stress test.

November figures from the Canadian Real Estate Association (CREA) continue to show this slow and steady climb. Although the prices are not yet where they were when the markets were at their peak in 2016 and early 2017.

CREA reports that the average home prices in Canada climbed 8.4% this November from November 2018. They also report that benchmark prices —- a far better indicator than the average of a “typical” home price advanced 2.6% year over year in the 19 markets CREA tracks to $638,300.

“Home prices look set to continue rising in housing markets where sales are recovering amid an ongoing shortage of supply,” said Gregory Klump, CREA’s chief economist. “By the same token, home prices will likely continue trending lower in places where there’s a significant overhang of supply, perpetuated in part by the B-20 mortgage stress test that continues to sideline home buyers there.”

But Canada is a large country, and conditions in all markets vary locally. Let’s dive deeper into how each major market is faring.

The Prairies continue to suffer

The Prairies have yet to recover from the decline in oil prices. During oil-boom times developers significantly overbuilt, and there’s now a serious excess of inventory. Because of their weak economy demand is falling short. So the Prairies continues to be the weakest link in Canada’s housing market.

“The number of months of inventory has swollen far beyond long-term averages in Prairie provinces and Newfoundland & Labrador, giving homebuyers ample choice in these regions,” CREA reports.

All major cities in this area have seen price drops over the last five years.

Until demand increases the prairies will continue to be extremely competitive for sellers.

British Columbia has experienced perhaps the worst effects from government intervention. However, prospective buyers likely view these developments as positive and would like them to carry on even further.

The British Columbia provincial government introduced a foreign buyer and vacancy tax in 2017 and because homes there are already so expensive, the mortgage stress test introduced in 2018 had a fairly significant impact. Banks are now preventing prospective buyers from borrowing funds they cannot afford should interest rates rise 2%. This has likely dampened demand in British Columbia’s biggest cities. But while prices are still down, the declines are shrinking, indicating a coming rebound.

Ontario is now the shining star of Canada’s housing market, with almost all cities posting major year-over-year increases. It’s unclear why exactly Ontario is doing so well. The Ontario government also intervened in the form of the Ontario Fair Housing Plan. But less measures were implemented than in British Columbia. When we look closely at the data it’s clear the less expensive cities are the ones posting the most significant gains, indicating that the mortgage stress test simply pushed buyers away from Toronto homes for sale and into smaller cities that have economic landscape independent of Toronto. That supply and new listings are at the lowest levels seen in the past decade is one significant factor.

For more price information on Canada’s housing market this month, check out the infographic below: 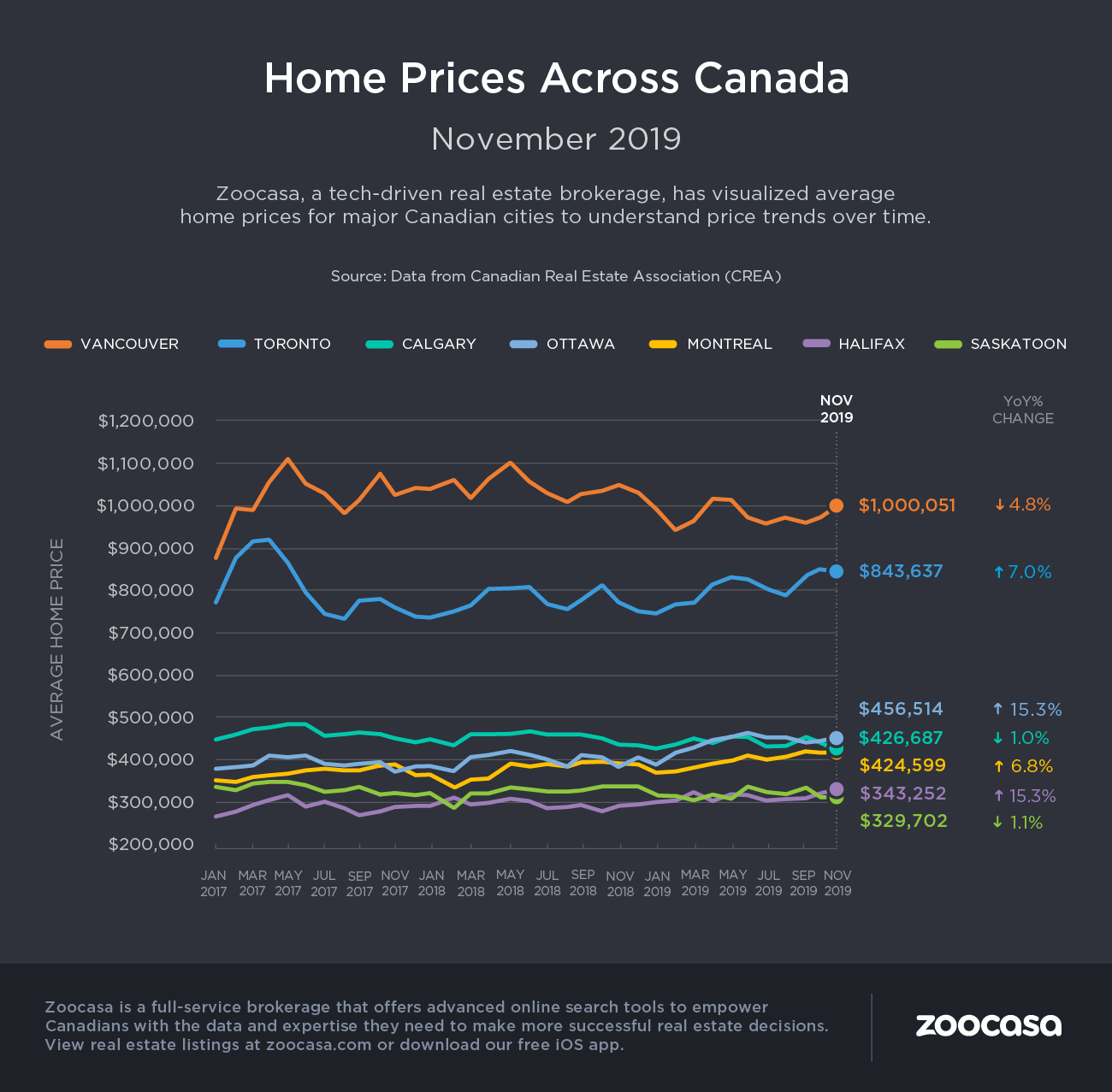