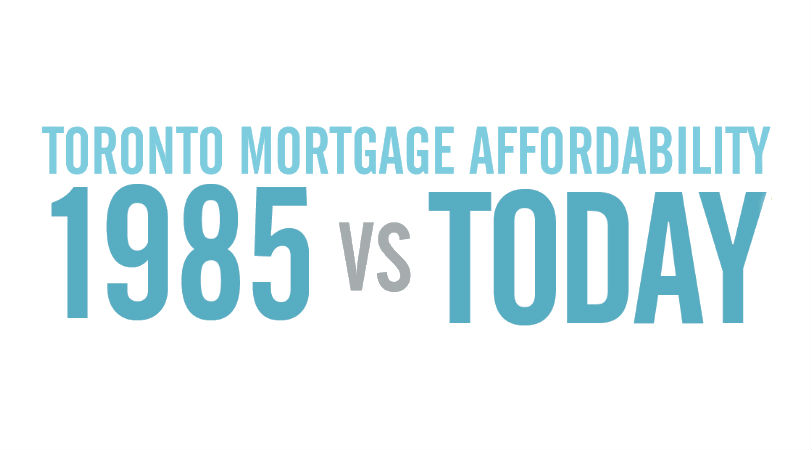 The average house price in Canada has gone up substantially in recent years, rising from approximately $331,000 in 2010 to nearly $449,000 today. At the same time, mortgage rates are at very low levels, allowing Canadians to buy houses at prices that would’ve been prohibitive at historically “normal” interest rates.

We decided to take a page from a recent National Post article and look at the monthly carrying costs of buying an average-priced house in Toronto now versus in 1985. At that time, house prices were much lower but price alone doesn’t paint the full picture. Monthly carrying costs – driven by interest rates – should also be considered.

The following diagram shows the changes in home price, monthly carrying costs and what percentage of income is required to carry the average home in Toronto. See our notes at the end of the post for details on methodology.

First, house prices have risen much faster than income. Second, mortgage rates today are significantly lower than in 1985. It’s because of the latter fact that people are now able to carry such huge mortgages. Yet even with the low rates, total monthly carrying costs as a percent of income still comfortably exceed the level seen in 1985 (57.91% vs 48.16%).

The above chart pertains to the average home sold in Toronto. Of course, the average house price is a blended statistic, taking into account detached and semi-detached houses as well as condos.

So how does the current affordability of condos and detached houses compare to 1985? RBC Economics recently studied this issue and here’s what they found:

Not surprisingly, it’s the detached housing market where affordability is really stretched. Monthly condo carrying costs are slightly above their long-run average but not nearly as much as two-storey houses.

Notes on assumptions and methodologies: