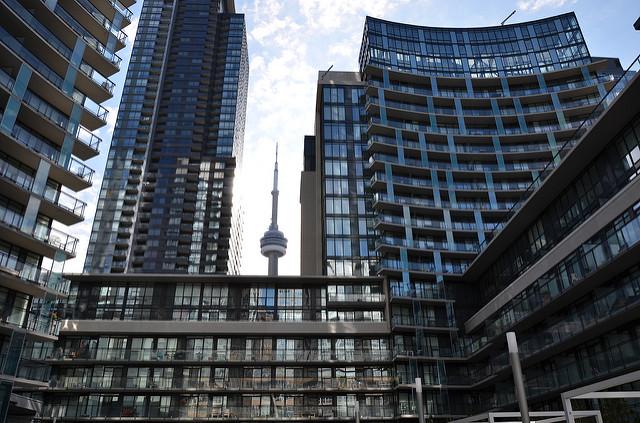 Buyers from outside Canada are driving up home prices in Toronto and Vancouver. That’s a popular view of the hot real estate markets in those cities, but there’s no definitive way to measure the level of foreign ownership in Canada’s housing markets.

A recent report by Canada Mortgage and Housing Corp. (CMHC) tries to bridge the information gap, at least for condominium ownership.

But the government agency acknowledges it doesn’t have all the data on foreign buyers. “Despite a range of statistics suggested by various studies on the size of foreign ownership, available factual information remains scarce,” the report says.

CMHC bases its figures on surveys of condominium building property managers. It considers anyone whose permanent residence is outside Canada to be a foreign owner, including Canadians who moved out of the country but still own condos in Canada.

To break it down further, about 10% of the newer stock in Toronto Centre is owned by foreigners, compared to buildings built in the 1990s.

Vancouver is similar, CMHC found. The share of foreign ownership rose from 2% for older buildings to 6% for structures completed since 2010.

As senior vice-president of Urbanation, a condo and rental market research firm, Shaun Hildebrand keeps a close eye on condo trends. Besides an increase in foreign ownership, he says there was a massive surge in the total number of condo units completed between 2014 and 2015.

While there was an increase in completions last year, Hildebrand says, the jump is backward looking. Most of these completions would have been purchased four or five years ago as pre-sales.

The recent rise in foreign ownership of condos can be traced to a spike in pre-construction sales in 2011. In that year, condo sales were 50% higher than the previous 10-year average and price growth accelerated by 10% in the new condo market. That was about double the long-term average.

During that period, he says surveys actually show an increase closer to 95% in the number of foreign-owned units in those newer buildings.

“At the time, there were a lot of questions about what was driving the spike in activity. Clearly, looking back, it must have been something external,” he explains. “Now we know, based on this new information from CMHC, that it is likely tied to an increase in foreign activity during that period.”

While foreign ownership is not significant compared to other factors in the condo market, it did seem to be a driving force in 20011, Hildebrand says.

“When we talk to brokers, they tell us that foreign buyers usually have a connection to Toronto, either because they have businesses here or they are buying for their children who are going to school,” he notes. “Foreign student enrolment at universities in central Toronto is at an all-time high.”

With a lag of four to five years between pre-sales and completions, we’re seeing the first signs of the past rise in foreign demand translating into actual built units. If all the net gain in foreign ownership in the condo market came as a result of new project completions, then foreign buyers contributed 14% of the growth in the stock this year—a share in line with Urbanation’s surveys.

In a speech last December, CMHC president Evan Siddall conceded there wasn’t enough data on foreign ownership. He said landlords may not be forthright in reporting to the federal agency.

“A lack of accurate and reliable data makes it difficult to determine if or how foreign ownership may be affecting the market,” he said. “Foreign investment may be more mobile and subject to capital flight, which could increase volatility in domestic housing markets.”

Siddall said CMHC is seeking more information on foreign ownership of single family homes and purchases of Canadian real estate for investment. It may survey realtors, builders, and lenders to get a more complete picture.

In the 2016 federal budget, the government earmarked $500,000 for Statistics Canada to develop a method to measure the level of foreign investment in Canadian real estate over the next year.