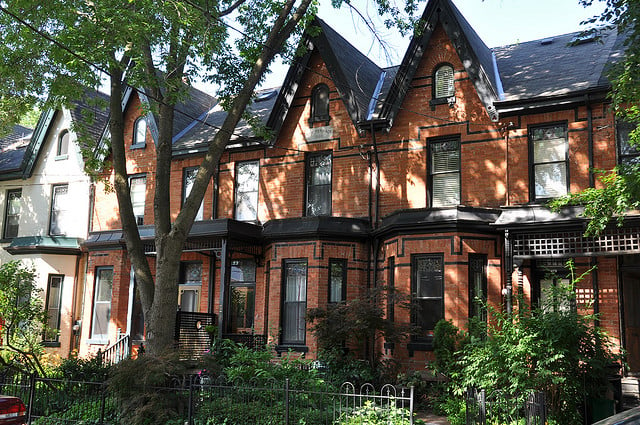 The big story in real estate in 2015 was the continued talk of a potential housing bubble: home prices are so high that they’re about to burst, interest rates – which are incredibly low – are going to soar beyond belief, and when that happens countless Canadians are going to be out on the streets.

In December, the respected research think tank, the C.D. Howe Institute, released Mortgaged to the Hilt, a report that finds that a significant number of Canadians carry a lot of mortgage debt. The report goes on to say that most highly mortgage-indebted households are among the lower income, younger people and concentrated in the provinces with the strongest housing booms – Ontario and British Columbia.

My first reaction to this scenario is that it’s a lot bunk. Of course young people, poor people, and people who live where housing costs are highest would be more likely to have big mortgages. What’s the big deal?

At least that was my reaction until I went to a screening of The Big Short, which touches on the financial crisis in the United States in 2008 when the American housing market crashed. One of the lines in the movie is that you don’t expect bad things to happen until they do. Then it did. And so it might in Canada, even if all the arguments I’m going to raise suggest otherwise.

Shortly after the C.D. Howe report was released, the Bank of Canada (BoC) released its Financial System Review. It says that about 720,000 Canadian households are considered highly indebted – that is they carry debt equal to 3 ½ times what they earn every year. Even though that’s only 8% of the population, the BoC report mirrors what the C.D. Howe Institute says: that those borrowers more highly in debt are younger, earn less money, and live in Ontario and British Columbia.

The incidence of heavily indebted households for those under 35 is almost double those over 65. They earn $51,000 a year whereas the median for everybody else is $79,000, and real estate makes up 90% of their assets. As the C.D. Howe report puts it: “there are many cases where a primary residence is the major financial liability of a household and is, at the same time, the only significant asset.” These are the people the BoC says are most vulnerable to a downturn in the economy, unemployment, or a significant rise in interest rates.

Finance Minister Bill Morneau said housing was one of the first briefings he took from his officials. High prices are regional so his dilemma was what could be done to contain Canada’s two most expensive housing markets without precipitating a major decline in cities like Calgary and Montreal where prices are flat or falling? From 1999 to 2014, the average price of a house soared by 158%. However, prices declined in one quarter of Canadian cities last year. In Calgary, sales declined by 29% from the same month a year ago.

But BoC governor Stephen Poloz is predicting an orderly unwinding of the country’s sizzling housing market, and not a sudden correction. The BoC had previously estimated that home prices in Canada were up to 30% overvalued, but in its latest report, Poloz said that this calculation had “less and less relevance” because of a strong mortgage underwriting culture in Canada.

The average price of a house in Canada happens to be about $455,000. But the average detached home price in Toronto is more than $1 million and in more than Vancouver over $1.5 million.

The other tool the BoC has at its disposal is to raise interest rates. The key interest rate in Canada now stands at 0.5% and the pundits keep anticipating a rate hike. That’s the big worry for those Canadians carrying a lot of mortgage debt. But it’s always a toss up between inflation and recession, and the BoC raises interest rates in order to curb inflation. Canada’s consumer price index, which measures inflation, shows an average annual increase of about 2%, close to the BoC’s target. Despite the high cost of housing and the problems in the oil patch, the economy is relatively balanced.

Canada’s economy is also closely tied to the American economy. The old adage is that when the U.S. sneezes, Canada catches a cold. So all eyes were on what the U.S. Federal Reserve would do as the American economy recovered. Well, the Fed did raise short-term interest rates in December for the first time since 2006. But it was only by 0.25 percentage points and the Fed says any subsequent increases will come slowly.

So far there has been no effect on rates in Canada. If there continues to be economic uncertainty, the government isn’t going to raise interest rates. In fact, the Bank of Canada is musing about actually dropping rates to negative levels, although rates for mortgages would remain a point or two above zero.

Housing and real estate related activity, including the imputed value of owning a home, represents about 15% of the country’s gross domestic product, maybe more if you factor in construction and building materials and other related costs. It’s been one of the few bright spots in a struggling economy, so it has to be protected. “Home ownership is a big portion of the financial well-being of the middle class,” Kevin Lee, CEO of the Canadian Home Builders Association told Bloomberg News in a recent interview.

It’s positive to boost home ownership. The housing boom has had many desirable economic effects. Existing owners have benefited from the rising wealth associated with increased real estate values. The wealth effect, even if it’s only on paper, contributed to economic growth, as did spending on housing-related items. Jobs were created in the construction and real estate sector and indirect jobs were generated from the housing-related expenditure.

While household debt has increased significantly, close to two-thirds of that borrowing has been through mortgages that have purchased an appreciating real estate asset, which has helped boost the net worth of many Canadians. Sure, people with lower incomes carry more debt, but owning property is one way to combat wealth inequality. If Canadians struggle to manage a sudden change, like job loss or higher interest rates, it’s not just housing – but every other aspect of their lives – that will be affected.

Household income tends to rise naturally with age and experience, so first-time home buyers will obviously have less financial resources than their elders when buying their first house. There’s no shame in borrowing from the Bank of Mom and Dad if you can. My wife and I did 35 years ago. Also, the Canadian government’s Home Buyers’ Plan (HBP) allows first-time home buyers to borrow up to $25,000 from their RRSP for a down payment, tax-free. If you’re purchasing with someone who is also a first-time buyer, you can both access $25,000 from your RRSP for a combined total of $50,000.

Canada has long faced warnings about the need to head off a housing crash like the one in the U.S. that The Big Short shows. To prove how good these warnings are, renowned American economist Paul Samuelson once wrote that the stock market “predicted nine out of the last five recessions.” We’re still waiting for the bubble to burst.