This morning, the Bank of Canada (BoC) announced it would maintain the target for the overnight lending rate at 0.50%, where it’s been since July 2015. The scheduled announcement followed weeks of “will they or won’t they” speculation as oil prices have continued falling and the overall economy has struggled as a result.

The BoC’s main agenda is to control the rate of inflation, and in their eyes the current rate is doing the job. In a release, the BoC said: “Total CPI inflation remains near the bottom of the Bank’s target range as the disinflationary effects of economic slack and low consumer energy prices are only partially offset by the inflationary impact of the lower Canadian dollar on the prices of imported goods.” To say it in plain English: the Canadian dollar is low enough to make up for the struggling economy and low gas prices, where inflation is concerned.

So what does this mean for mortgages? If you have a fixed rate mortgage, everything stays the same for you, as fixed rates aren’t directly connected to the BoC’s key interest rate. If you have a variable rate mortgage, you can also expect to pay the same rate for the next six weeks, until the BoC has its next chance to make a change.

If you’re looking for a new variable rate mortgage there won’t be any immediate change as the prime rate should remain the same. However discounts to prime rate have been subtly shrinking over the last six months, and today’s lowest variable mortgage rates are around 2.09% – or prime minus 0.61%. That’s up from the prime minus 0.90% rates that were available back in July even though prime hasn’t changed since then. 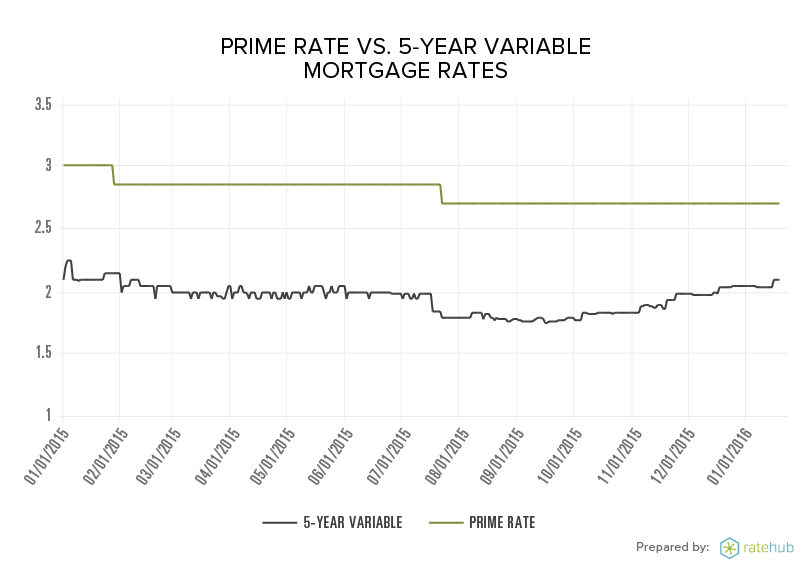 Rate competition normally picks up in the summer, so there’s a chance variable rates will come back down, and there’s still the possibility the BoC will cut rates later this year.

The next BoC interest rate announcement is scheduled for March 9.