Are Fewer Pensions Contributing to a Looming Retirement Crisis?

In 2014, the Conference Board of Canada released a study showing that 60% of Canadians did not feel they had saved enough for retirement. Underscoring this predicament, 51% of respondents in the 45–64 age category indicated that they intended to keep working past their official retirement date.

Just this year, a CIBC report further highlighted Canada’s looming retirement crisis. 5.8 million working- age Canadians can expect a drop in their living standards of at least 20% in retirement, according to the bank’s work.

One key reason for Canadians’ lack of retirement readiness is the decline in pension plans offered by employers. As the following graph from Statistics Canada shows, the percentage of citizens with a company retirement plan has been shrinking since the late 1970s: 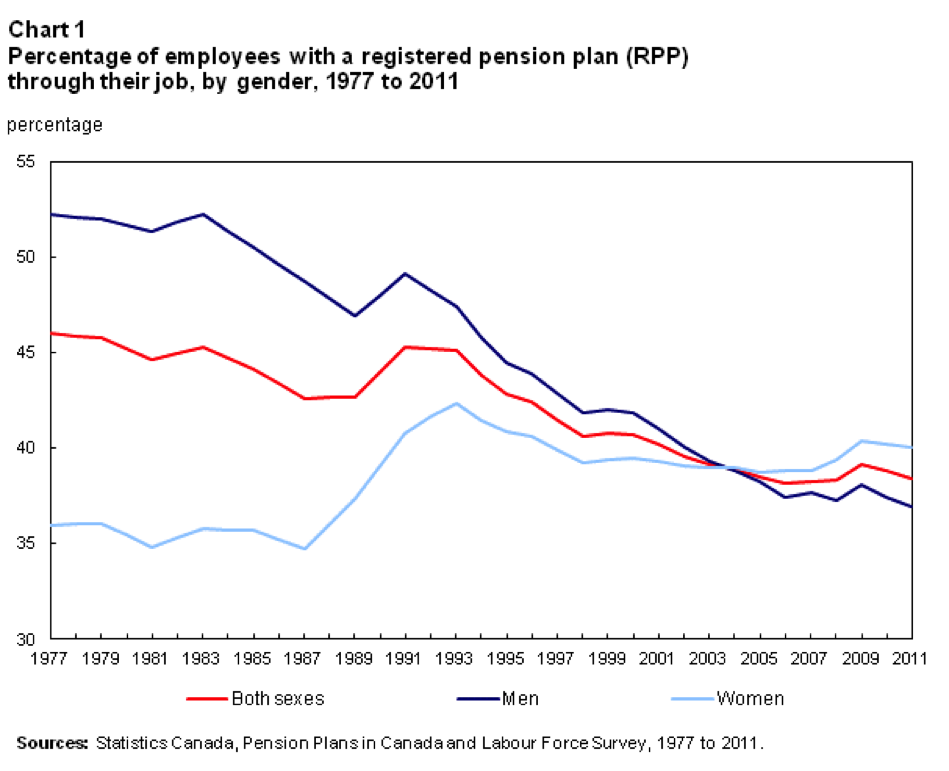 Believe it or not, the situation is actually even more precarious than the graph suggests. This is because employers are not just more unlikely to offer pensions; in addition, the kind of plans that are being offered is changing.

There are two basic varieties of pension plans. The first is known as a defined benefit plan. With this kind of arrangement, an employee contributes a certain percentage of their salary (5% is typical) and the employer also makes a contribution. Crucially, the retirement benefit for the employee is set in advance. Regardless of how the underlying investments perform, the employer is obligated to pay the retiree the defined benefit. Not surprisingly, these plans are considered the gold standard of retirement packages because they remove uncertainty for the employee.

By contrast to defined benefits plans, some companies offer what are known as defined contribution retirement pensions. With these, the employer pays a fixed percentage of an employee’s income into the plan every year, and the employee may also make a contribution. But the employer’s obligation ends there: they only commit to making the annual contribution. What they do not promise is any “defined benefit” once the person enters retirement.

Defined contribution and defined benefit plans are managed differently. For defined benefit pensions, the company administers the plan, hiring investment managers to seek adequate returns to make necessary payments to retired employees. With defined contribution plans, however, the employee chooses their own investments, often within a number of funds chosen by the company. In other words, it’s up to the employee to invest the pension contributions wisely.

As this chart from consultancy Towers Watson shows, Fortune 500 companies (a proxy for the corporate world in general) are increasingly offering defined contribution plans in place of defined benefit plans:

The figures are striking. Whereas 299 of Fortune 500 companies offered defined benefit plans in 1998, the number fell to 118 by 2013. Conversely, the number of companies only offering defined contribution plans soared from 195 to 382 in this timeframe.

Should Canadians be worried about these pension trends? In a word, yes. There are still some public and private sector workers/retirees sitting pretty with defined benefit pensions, as the Walrus magazine documented. However, workers with gold standard plans are increasingly the exception, not the rule. In this context, there is a growing clamour for government to do more. This is seen both in Ontario’s new pension plan, as well as calls for an expansion of the Canada Pension Plan.

In the absence of government action, individual Canadians will largely be responsible for their own retirement planning. There are two groups of workers who need to give careful thought to this issue. The first are those with defined contribution plans and the second are those without any private sector pension at all. Canadians without any pension must save on their own for their retirement. This means taking maximum advantage of TFSA and RRSP contribution room. And for this cohort, as well as those with defined contribution plans, it’s necessary to properly manage their investments.

What does proper retirement planning look like from an investment standpoint? For one thing, it usually means taking more risk at a younger age, but less risk as retirement nears. Experts have long advised that the share of equities in your portfolio should shrink as you get older. Once you’re closer to retirement, you can’t easily bounce back if there’s a sharp market correction (because you’ll soon be in need of the money).

On the other hand, experts often suggest a greater percentage of stocks at younger ages, due to the potential for higher capital gains. Of course, these are rules of thumb, and if you believe the market is currently significantly overvalued, you might temporarily underweigh the equity portion of your portfolio in favour of safer investments such as fixed income investments, like GICs. (And we do compare Canada’s best GIC rates).

More and more, the onus is on the individual to ensure an adequate retirement. The decline of guaranteed pensions (and pensions in general) means that Canadians are increasingly responsible for their own well-being after they’ve stopped working.

Banks vs. credit unions in Canada: what’s the difference?