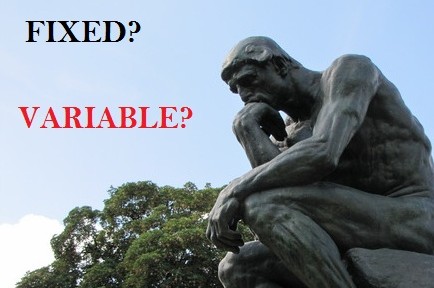 The Canadian Imperial Bank of Commerce (CIBC) is one of the biggest banks in Canada, controlling 13.6% of Canada’s $1.1 trillion dollar mortgage market. Recently, CIBC conducted a poll of over 1000 people across the nation asking for opinions on mortgages. The results yielded a few interesting points.

A year ago today, the 5-year variable rate was largely favourable to its fixed counterpart due to the large spread. This is a far different cry from how the rates stack up against each other today, where the spread has shrunk to 34 basis points. Plus, it is widely predicted interest rates will increase in the next year (more on that below).

This is actually good news considering last year the number of Canadians unsure was 30%. It appears Canadians are getting to know the mortgage market a little better, hopefully through mortgage education centres like Ratehub.ca. If this is the case, it means Canadians have been raising their mortgage IQ and improving their financial sensibility.

What needs to be seen is whether those Canadians have been preparing and budgeting according to their mortgage expectations. If a mortgage rate increase is expected to occur, what happens to their mortgage affordability? Are their finances well-suited to accept the increased mortgage payments? The biggest domestic threat to the economy right now, according to Ottawa, is the record household debt the average Canadian carries. If mortgage rates rise, how many Canadians will not be able to afford their payments?