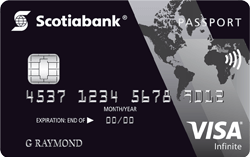 Redeem your points against any travel purchase on your statements

How to get approved

Launched in early 2018, the Scotiabank Passport Visa Infinite entered the fray as the only credit card from the country’s big banks to completely waive its foreign transaction fees (and made headlines for doing so). But its appeal doesn’t stop there.

One of the best travel credit cards in Canada, the Scotiabank Passport Visa Infinite is packed with other perks frequent travellers care about like airport lounge access, a strong sign-up bonus, and flexible points that can be redeemed flexibly for flights on virtually any airline.

For everything you need to know about this card, read our full breakdown below.

One of the greatest perks of this card – and arguably what it’s most known for – is that it comes with no foreign transaction fees.

You might not realize it, but almost every credit card charges an additional 2.5% foreign transaction fee on top of the exchange rate whenever you make a purchase in a non-Canadian currency — like when swiping your card while abroad or shopping online in US dollars.

If you’re a frequent traveller or typically spend a lot in foreign currencies, that can add up. For instance, if you budget $1,000 for food and transit during your one week vacation in London, this fee would typically cost you an extra $25 just for the convenience of using a credit card.

By saving you the cost of foreign transaction fees, the Scotiabank Passport Visa Infinite makes sticking with a credit card while travelling more compelling. That means you can avoid carrying huge wads of foreign cash or relying heavily on currency exchange offices (which tack on their own costly fees, especially in tourist hot spots).

Using a credit card abroad also means you get the added security of pin and purchase protection while also earning rewards on your spending. In the case of the Scotiabank Passport Visa Infinite, you’ll earn Scotia Rewards points on all your international purchases along with saving on foreign transaction fees.

The other major perk of the Scotiabank Passport Visa Infinite is its complimentary membership to Priority Pass, which opens up the door to a network of over 1,200 airport lounges worldwide.

Second, if you were to purchase the equivalent membership directly from Priority Pass, it would set you back $291 USD every year – which on its own is over double the card’s annual fee.

In order to qualify for the offer, you must:

The value of a Scotia Reward point is equal to $0.01 when redeemed for travel, meaning the sign-up bonus is worth up to $300. The one drawback is this offer doesn’t also include a first-year annual fee waiver like many other cards.

The Passport Visa Infinite earns 2 Scotia points for every dollar spent on groceries, dining, entertainment, and transit (including taxis, subway, buses, and rideshares including Uber).

On all other purchases, the card nets 1 Scotia point per dollar.

When redeemed for travel, 1 Scotia point equals $0.01, so in a way, this card acts like a cash back card for your travel purchases (with its 2 and 1 point per dollar earn rates working out to the equivalent of a 2% and 1% return respectively).

It’s worth noting that the card does have a slightly lower everyday earn rate than some comparable rewards credit cards, like the Scotiabank Gold American Express. But the Scotiabank Passport Visa Infinite is a well-rounded card that offers a ton of added value with side perks that are tailored to travellers like its no foreign transaction fees and lounge access benefits.

Scotia Points are extremely flexible and can be redeemed for travel rewards in two ways:

The latter is a great feature and means you’re not locked into using the bank’s in-house travel agency and can instead compare flight prices online and book travel plans completely on your agenda.

As mentioned earlier, the value of 1 Scotia Reward point is worth a consistent $0.01 when redeemed travel. That makes it easier to determine the value of a point compared to most other travel rewards programs since points values are constant and don’t fluctuate according to a rewards chart. Keep in mind though, you must redeem points in a minimum of 5,000 increments ($50 value).

When redeeming points for anything non-travel related (like gift cards or merchandise), you’ll get less than $0.01 per point in value – so it’s best to stick to using your points for travel-related redemptions. If you’re not much of a traveller and want to use your rewards to save on your everyday spending, consider checking out some of the best cash back credit cards in Canada instead.

It’s always reassuring to have travel insurance. Luckily, the Scotiabank Passport Visa Infinite’s insurance benefits are some of the best of any travel rewards card. Here’s an overview of what this card offers:

There’s also purchase insurance and price drop protection included. Most personal items are covered against loss, theft, or damage if the full cost of the item is charged to the card. Coverage extends for the first 90 days from the purchase date up to $60,000 and is in addition to other insurance coverage.

The card has an annual fee of $139, which is a little higher than some other travel rewards cards that charge around $120. That said, there isn’t an additional annual fee for adding your first authorized user – so you can pick up a supplementary card for a loved one at no extra cost. Most other premium cards charge around $50 to $39 a year for adding a supplementary cardholder.

The purchase interest rate is 19.99% if you have an unpaid balance and the cash advance rate is 22.99%. This rate won’t enter the equation as long as you pay off your balance in full every month and avoid borrowing money from your credit card.

The Passport Visa Infinite gives you a free Avis Preferred Plus membership, which provides up to 25% off car rentals in Canada and the US as well as complimentary upgrades (when available). You can also get a special number to call for reservations and customer support.

You’ll even have access to the Visa Infinite Luxury Hotel Collection – a selection of over 900 hotels around the world. When staying at an eligible hotel, you’ll get a best available rate guarantee, free daily breakfast for two, an automatic room upgrade or late checkout (when available), and a $25 food or beverage credit.

Introductory 2.99% Interest Rate Offer Description and Conditions:® Credit Card Cheques and cash-like transactions) (collectively “Cash Advances”) subject to the conditions below. This introductory rate applies when the new Account is opened by February 28, 2022 and will continue for 6 months from date of Account opening (the “Promotional Period”).  After the Promotional Period, purchase balances at the promotional rate of 2.99% (including any unpaid balances) will increase to the preferred interest rate for purchases (currently 19.99%) and the promotional 2.99% interest rate on any Cash Advances (including any that remain unpaid after the Promotional Period ends) will increase to the preferred interest rate on Cash Advances (currently 22.99%).

If you don’t pay the minimum payment on your Account by the payment due date on your statement, two times in any consecutive 12-month period, you will lose the benefit of this promotional Rate Offer and the interest rates that apply on any unpaid balance will increase to the standard annual interest rates that apply to your Account (currently 25.99% on purchases and 27.99% on cash advances (including balance transfers, In general, if you make a payment that exceeds the minimum payment on your statement, we will apply your payment on a proportionate basis among each group of billed charges on your Account. We group charges based on the interest rate that applies to the group of charges. Your payment cannot be applied to the balance(s) of your choice. See your credit card agreement for more information about how we apply payments to your Account.

Rates and Fees: The current annual fee is $139 for the primary card, $0 for one additional supplementary card and $50 for each additional supplementary card thereafter.
The current preferred annual interest rates for this Account are: 19.99% on purchases and 22.99% on cash advances (including balance transfers, Scotia® Credit Card Cheques and cash-like transactions). All rates, fees, features and benefits are subject to change.

The Scotia Momentum Visa Infinite Card is issued by The Bank of Nova Scotia (the “Bank”) and applications for this card are subject to approval by the Bank. See the application disclosure statement when you select “Apply Now” for full rates and fees that apply to this card.

1 The 10% Cash Back and First Year Annual Fee Waiver Offer (the “Offer”) applies only to new Scotia Momentum® Visa Infinite* credit card accounts (“Accounts”) that are opened, and any supplementary Account cards issued, by November 21, 2021 and is subject to the below terms and conditions.  All other terms and conditions of the Program Terms continue to apply during the Offer period. Offer may be changed, cancelled or extended at any time without notice and cannot be combined with any other offers.

10% Cash Back Offer Description and Conditions: You will earn 10% cash back on the first $2,000 in eligible purchases you spend on your new Account within the first 3 months of the Account open date (the “Offer End Date”). Eligible purchases include purchases (less any refunds, returns or other similar credits) but do not include payments, cash advances (including balance transfers, Scotia® Credit Card Cheques or cash-like transactions), interest, fees or other charges. After the Offer End Date, you will earn regular cash back on eligible purchases at the regular cash back rate (the “Cash Back Program Rate”) described in the Scotia Momentum Visa Infinite Cash Back Program Terms and Conditions (the “Program Terms”).  The 10% cash back rate for any category is made up of the sum of: (i) the regular Cash Back Program Rate (variable by categories as set out under the Program Terms); and (ii) a “Cash Back Bonus Rate”. Cash back earned under this Offer will be credited to your Account in 2 instalments so long as your Account is open and in good standing at time of payout of each:
1. Bonus Cash Back: The amount earned under the Cash Back Bonus Rate will be credited to your Account within 7 months from the Account open date; and
2. Regular Cash Back: The amount earned under your regular Cash Back Program Rate will be credited to your Account according to the regular cash back payment schedule as set out under the Program Terms.

The Account is considered in good standing if it is not delinquent (past due) or over limit and the Cardholder(s) is not in breach of the Revolving Credit Agreement that applies to the Account.

Annual Fee Waiver Offer Description and Conditions: We will waive the initial annual fee for the primary card and each additional supplementary card on the Account for the first year only.

Offer may be changed, cancelled or extended at any time without notice and cannot be combined with any other offers.

Rates and Fees: The current annual fee is $120 for the primary card and $50 for each additional supplementary card. The current preferred annual interest rates for the Account are: 20.99% on purchases and 22.99% on cash advances (including balance transfers, Scotia® Credit Card Cheques and cash-like transactions).  All rates, fees, features and benefits are subject to change.

†Based on a first year annual fee waiver of $120 for the primary card, $50 for one supplementary card, and a potential bonus cash back earning of at least $180 during the Offer period assuming a minimum spend of $2,000 at the lowest possible cash back earn rate under the Program of 1% (i.e., Cash Back Bonus Rate of 9% x $2,000).  Actual value will vary based on number of supplementary cards issued for the Account and individual category spend in the first 3 months.  See full Offer terms and conditions above.

Whether you want cash back or travel points, lounge access benefits or roadside assistance perks – there’s a credit card out there that’s right for you. Find it in under 2 minutes.